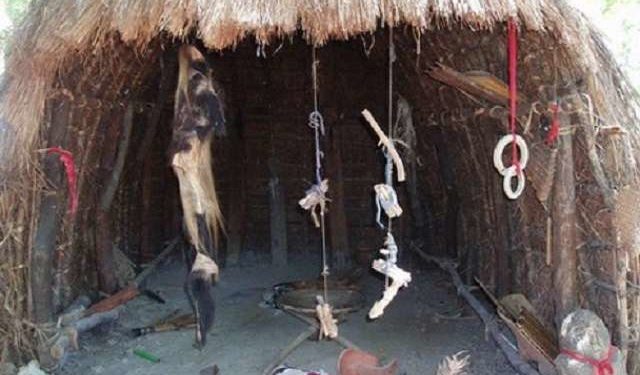 Two suspected fraudsters, Ahmed Fatai and Olufemi Adaramola, had been arrested over the weekend for allegedly using a live snake and other fetish items to defraud a man of N5m.

They were arrested in the Ijebu Igbo area of Ogun State by the Zonal Intervention Squad of the Command.

The suspects had asked their unnamed victim to pay N75m for a concoction in order to have good luck.

Shortly after their demand, the victim reportedly lost his consciousness but only regained it after he raised N5m and presented to them.

The victim was said to have reported the case after the suspects absconded with his money.

According to Punch, the Zone 2 police spokesperson who confirmed the arrest said the suspects would be charged to court at the end of investigation.

He said the man was asked to buy some concoction in the Ikeja area of Lagos State, where the fraudsters met him.

He said, “They said they were herbalists from the Ijebu Igbo area, and they could also prepare a concoction for him for good luck. The victim was thereafter taken to Ijebu Igbo for special prayers for good luck.

“After the prayers, they asked him to pay N75m. He had paid them N5m before he regained his consciousness and reported the matter to the police.

“Investigation has proven that the duo usually changed their dressing at every point to deceive unsuspecting people.

“Fatai had dressed like an old man when he met the man in Ikeja.

“The victim said he did not know how he gave the money to them.

“The Assistant Inspector-General of Police, Abdulmajid Ali, has directed that they be charged to court.”

The spokesperson urged Nigerians to be careful and report suspicious individuals, who do not have a legitimate means of livelihood.

“Exhibits recovered from the suspects included a live snake and some fetish items which they used for their dirty and criminal deals,” the spokesperson stated.