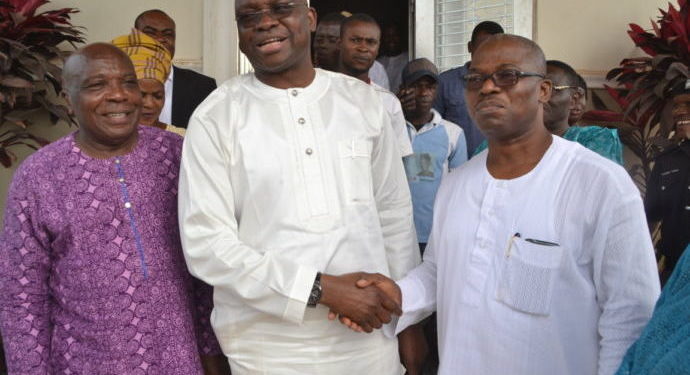 According to a press statement issued by the Chief Press Secretary to the Governor, Mr Idowu Adelusi, Fayose, said it was a mere courtesy visit and proper for him as a governor and leader.

The visit which took place around 2.30pm had the Chief of Staff to the Governor, Chief Dipo Anisulowo, on the entourage.

The governor who went with only three vehicles in the convoy said he and Segun Oni had a useful discussion claiming that a governor is the leader of all, saying “leadership comes first, Ekiti comes first and leadership is about sacrifice to make for the purpose of unity. That is exactly what I am doing”

He said further, ” there is a difference between leadership and politics. To me, Ekiti comes first, every leader willing to make Ekiti first, I will visit him.

“I am the governor of the state and everybody is my subject. My visit to Segun Oni has nothing to do with politics. When it comes to how to move Ekiti forward, we must firstly remove our political garment.”

Segun Oni who warmly received Governor Fayose said that he was overwhelmed with the visit which he claimed was brotherly.

His words, “It is a brotherly visit, I am happy for that. It is welcome development and good for Ekiti State. We are both leaders of the state.”

Shortly after he came to office, Fayose restored the portrait of Segun Oni which was removed by former governor Kayode Fayemi from the Governor’s Office.

Fayose also restored all his benefits as former governor of the state.