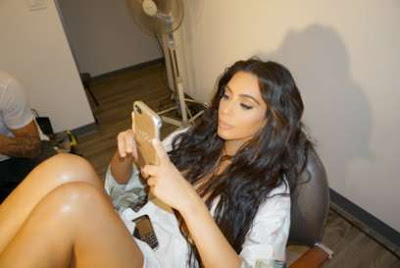 At last, the “Keeping Up With The Kardashian” star shared three posts on Facebook, including a photo of herself and a link to old family Halloween videos, on Monday, October 31, 2016.

“Downtime,” Kardashian captioned a shot of herself relaxing while reading on her smartphone. The photo appeared to be old, and showed Kim with her Blackberry, which she famously mourned when it died on her earlier this year.

The mum of two also shared a link of old family videos which she posted on her subscription app ‘KimKardashianWest’. She also shared a link to a story on her app written by her friend and personal assistant Steph Sheppard, about last-minute Halloween costumes on the Keeping Up With The Kardashian star’s app.

Kim has been keeping a really low profile ever since she was robbed in her Hôtel de Pourtalès apartment in Paris by five masked men, who tied Kardashian up at gunpoint and made off with millions in jewelry.