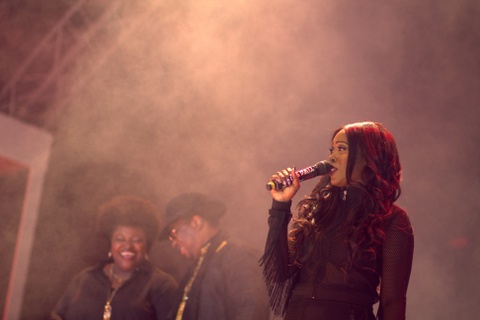 During Tiwa Savage’s performance at the monarchical-themed concert; ‘3 Thrones’ held on Sunday, 23rd of October, 2016 at EKO Hotel Convention Centre, Lagos; the singer brought out celebrity couple Tunde and Wunmi Obe to ask a number of questions regarding their laudable marital bliss.

Tiwa halted her performance to comment on the scourge of failed marriages among young couples before she went on to ask the couple the secret to their successful married life. A question to which Wunmi quickly replied; “I married the man I love – he’s my friend and everything.”

“Most importantly; the only third party allowed in your life should be God and no one else” the couple concluded in unison.
Tiwa Savage performed a number of her smash hits including ‘Kele Kele’, ‘Without my Heart’, ‘Bad’, ‘Wanted’, ‘Standing Ovation’ and more. Fellow label mate Dr. Sid also joined her on stage to perform another smash hit of hers; ‘If I Start to Talk” before wrapping up her exhilarating performance for the night.

‘3 Thrones’ also witnessed performances from some of the industry’s finest, including Timaya, Phyno, Davido, Ycee, Pepenazi, ill Bliss, Naomi Mac, Tjan, Yungsix and a host of others.

I almost became a prostitute – ...

Fun, Games and Insights: This Is NOT ...