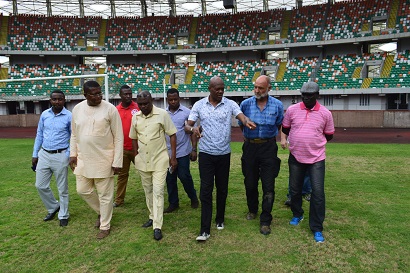 Work has commenced apace on the pitch of the Godswill Akpabio International Stadium, Uyo ahead of next month’s 2018 FIFA World Cup qualifying match between Nigeria and Algeria.

In line with the NFF’s promise to get the Akwa Ibom State Government to work on the turf, following some complaints by Super Eagles’ players after last month’s 2017 Cup of Nations qualifier against Tanzania, the NFF wrote to Governor Udom Emmanuel on the issue and followed up with a first inspection of the pitch on Saturday.

The NFF’s inspection team, led by the Deputy General Secretary, Dr. Emmanuel Ikpeme, and including Assistant Director (Technical) Siji Lagunju and Chief Sports Officer, Sunday Okayi, was received and taken on the tour of the venue by Hon. Monday Uko, the Akwa Ibom State Commissioner for Youth and Sports and the Commissioner for Special Duties, Engineer Etido Inyang. The Consultant to Julius Berger, the world –renowned construction company handling the work, was with the team.

A second inspection has been fixed for Tuesday, 25th October 2016 while the final inspection will come up on Wednesday, 2nd November 2016.

“It is a task that we are approaching with all seriousness, and we want to appreciate the Akwa Ibom State Government for the seriousness that it is also attaching to this important task,” Ikpeme told thenff.com.

Earlier on Thursday, 13th October, NFF 1st Vice President Seyi Akinwunmi and Chairman of the Technical and Development Committee, Chris Green, as well as Ikpeme, held a meeting with Hon. Uko to discuss logistics in order to ensure seamless organization of the big match.

Also on Thursday, the NFF Deputy General Secretary, Dr. Ikpeme led Mr. Abdelwahab Djahid Zefizef, 1st Vice President of the Algeria Football Federation on a guided tour of the Godswill Akpabio International Stadium, following a written request to that effect by the FAF.

African Qualifying Series Group B leaders Nigeria host Algeria’s Fennecs at the Godswill Akpabio International Stadium on 12th November 2016 in one of the Matchday 2 encounters.

In the qualifying race for 1994 FIFA World Cup, Nigeria defeated Algeria in Lagos and drew with the Fennecs in Algiers to qualify for her first ever World Cup.

Nigeria defeated Algeria 1-0 at the 2002 Africa Cup in Mali, and by the same scoreline at the 2010 Africa Cup finals in Angola to win bronze.

Funke Akindele: My husband does not allow ...