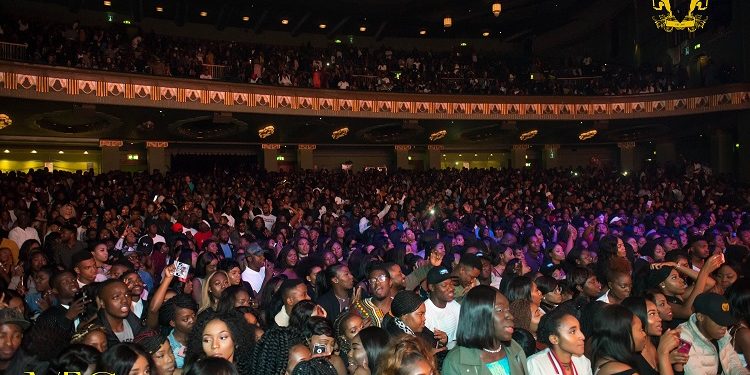 The ybnl crew lead by Olamide Baddo brings out the whole of the UK breaking the record for the attendance to their hugely anticipated Ybnlconcert 2:0. With huge anticipation around the sold out concert , the headline acts Lil Kesh , Adekunle Gold and Olamide entertained the 5000 strong fans at the eventim apollo . With the doors opening early, Dj”s Eni Money , Unbeatable, Neptizzle and Sean alongside the Acenote band and other acts ensured the fans were in party mood before and during Olamides first performance .

The only downside was the failure of Olamide to give his close off performance due to stoppages brought about by crowd trouble in and outside of the venue . With the venue at capacity the security had no choice but to close the doors refusing an angry couple hundred fans entry into the concert . After the headline acts had given incredible performances , the show had climaxed with Olamide returning to the stage only to be closed down by the arena due to continuous attempts by fans to gain entry into the venue , the safety alarm in the venue going off consistently and most importantly the time taken to resolve the developing problems .

To Olamide”s and the fans disappointment , fans were denied the highly expected performance of his monster hit who you EPP and  a few others tracks . Olamide said after the concert that although he was humbled at the record numbers of fans who came out to see him , he was still disappointed at the fact that his fans didn’t get to witness the end of the show which he had prepared for months  CEO of Smade events Junior Adeosun said “all attempts were made to ensure Olamide gave his
final performance including offering to cover any security costs to the venue but we eventually had to understand the health and safety concerns of the arena  owners as the crowd outside continuously rushed the door “.

With that being said , nothing could be taken away from the the night put together by smade events which saw another record breaking night for AFROBEATS in the UK and more importantly a night that crowned Olamide Baddo as officially the new King of AFROBEATS .

FUSION OF THE FIERCEST: AS FALZ, DAVIDO, ...