Firstly, we are in total amazement at the details of the results released by INEC because all of them are fake and not the figures announced at various units and as collated at various wards across the state. The fake results announced by INEC are entirely a fabrication which do not reflect the true picture of what transpired during the election. However, we are not totally surprised because long before now, we had anticipated this and had also warned INEC, security agencies and alerted Edo people at various press conferences and statements, on this situation.

?
Secondly, based on the results emanating from across the state, PDP won the election fair and square, and with a very comfortable margin. So it is with disgust that we have been receiving fake results which were never recorded in either the units or the ward collation centers.

Our rejection of the results released by INEC so far is based on, but not limited to, the following

We know that a fair turnout of voters was recorded statewide because the weather was very clement and voters were enthusiastic. However, unknown to unsuspecting Edo electorate, INEC had long provided the serial numbers of all result sheets to Adams Oshiomole and his APC government, to print fresh result sheets. This is not a mere allegation.

From the benefit of hindsight, the 18 day period of postponement of the election was to provide enough time for the Governor and his government to print these result sheets and perfect the writing of fake results at the units and at all levels of collation. 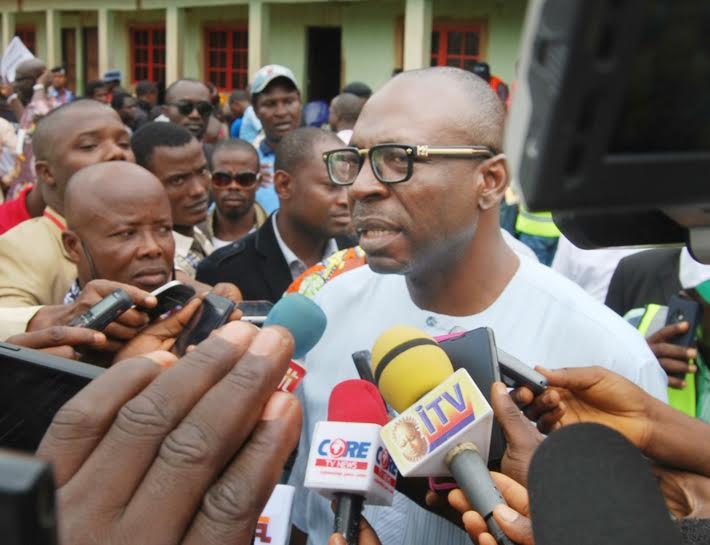 This scenario is further buttressed by the fact that on Monday September 26th, 2016, when election materials arrived from the CBN at INEC state office for inspection, agents of the political parties including the APC and PDP were given pre-typed copies of the serial numbers of all result sheets and the ballot papers. This was a clear security breach and an infringement on the credibility of the process, as these are sensitive materials, which should not have been sighted even by INEC officers.

Everything that has transpired had been carefully designed by the Adams Oshiomole led Edo State government and their cohorts in INEC. They perfected a scheme to void thousands of ballot papers, to enable them perpetrate their devices. It is widely recorded that over 88% of the voided ballots were PDP votes.

Postings of Commissioners of Police and and removal of officers from their units, even during the voting exercise, was a clear plot to destabilize the security apparatus in various LGAs and Senatorial districts. The same goes for the DSS personnel across the state.

Choice of collation from places they chose as well as the choice of the state returning officer, in the person of a close friend and associate of former Governors Fayemi and Niyi Adebayo of Ekiti State, who are top APC chieftains. They also prevented our agents in many cases from entering collation centers.

There are numerous accounts and records of Police harassment all over the state, designed to strike fear in the hearts of PDP members, using men of the CID (Criminal Investigation Department), SARS, MOPOL 60 Command, DSS and other security agencies. Of particular concern is the atrocious gangsterism demonstrated in Etsako West, the home of the incumbent APC Governor and the deputy governor nominee, where many of our members and agents were assaulted, almost mortally, and some still being detained as we speak.

Those still detained include Michael Etu, Gabriel Etu and Mohammed Sani. Also, a Honda Accord vehicle, with registration number FST 868 BC, belonging to one of our stalwarts was destroyed, and is still lying at the voting center.

There is also the widely reported and recorded case of collation center disruption in Oredo local government, by the notorious Osakpamwan Eriyo, who invaded the venue and released shots in the air, chasing away supporters and people, before making away with the results. This happened in the full glare of the Police, DSS, INEC and other security personnel. Interestingly, neither INEC nor the Police showed any concern or any resistance, even as we speak.

It is on record that the level of open financial inducements was unprecedented and indigent voters were being offered between N2,000 and N5,000 to cast their votes, and also forced to display their ballot prints. Numerous videos were posted on social media showing APC members handing out monies to voters, in the full glare of INEC and security officers.

Deliberate connivance with INEC staff to steal materials and results in various wards. We particularly take note of materials stolen at Ologbo, Ikpoba Okha, Nikorogha, Ovia South West, Urhonigbe in Orhionmwon, Udaba in Etsako Central, Opoji in Esan Central and many others.

To put it mildly, Edo 2016 has turned out to be a travesty of our democracy, and it is calamitous that in spite of all the atrocities committed by APC, nothing happened to thugs like Osakpamwan Eriyo who went to George Idah Primary school in Oredo Local government area, to snatch results in the full glare of the Police, SSS and INEC officials. Shooting, chasing and scaring away voters, and even international observers, is nothing short of a bastardisation of our hard earned democracy.

A few days ago, we mentioned in a press statement, that Adams Oshiomole boasted openly, how he had prepared results already for the election, which will be announced, and PDP can go to court. It has been executed today, but the will of Edo people will never be subverted by Adams Oshiomole and his cohorts. We will do everything within the law to claim our mandate. In the words of Plato, the penalty we pay for refusing to participate in politics, and to exercise our right, is that we end up being governed and oppressed by evil men. This impunity must end in Edo State!

Nigeria at 56: US congratulates Nigeria