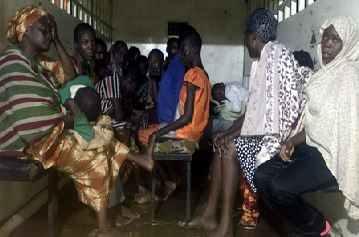 Recall that Adeyemi was arrested, weekend, by policemen attached to Area ‘G’ Command, Ogba, following the discovery of 28 chained persons – 13 children and 15 adults.This is just as one of those chained was discovered to be a cancer patient, contrary to claims by the suspect that they were all mentally deranged.

At press time yesterday, the cancer patient (names withheld) was still undergoing treatment at the hospital from sores sustained in her two legs where she was chained, while others were at the Lagos State rehabilitation centre.

Commissioner of Police, Lagos State Police Command, Fatai Owoseni, who made the disclosure, said: “We had another tip-off that there were people he (suspect) buried in his compound and he confirmed it during interrogation.

“Because the area is swampy, the suspect allegedly buried some people in the swamp and about three others in the house.”

‘I am a herbalist, not prophet’

However, during interrogation, the suspect maintained that he was a herbalist, saying there was not time he identified himself as a prophet. He said: “I am a herbalist and not a prophet. One of those chained is my step-son; I chained him and locked him inside the room because I wanted to cure him of stealing. Others are people I was treating of madness.” Asked what the shallow graves were for, he replied, “I bury patients who died in the process of receiving treatment. Some of them were brought very sick from the hospital for treatment. “At times, some would be healed while others won’t make it. They were buried with the consent of their relatives.”

He further denied claims that he sold human parts to ritualists, saying “I swear, I don’t sell human parts. I am only a traditional healer.” However, Owoseni assured that the police would get to the root of the matter.