Ace music star, 2Baba who embarked on a 2 day campaign in Edo State,  for his ‘VOTE NOT FIGHT’ initiative was conferred as Youth Ambassador for the National Youth Council of Nigeria (NYCN), today, the 12th of August, 2016. The celebrated music star was issued his certificate of conferment during the International Youth Day celebration which took place at the Samuel Ogebemudia Stadium, Edo State.

Prior to his conferment, 2Baba on the 11th of August, 2016 spearheaded a ‘VOTE NOT FIGHT’ campaign session which held at the Youth Centre in Benin, Edo State. He spent the day sensitizing the youth on the need to remain peaceful during and after the forthcoming electoral process. 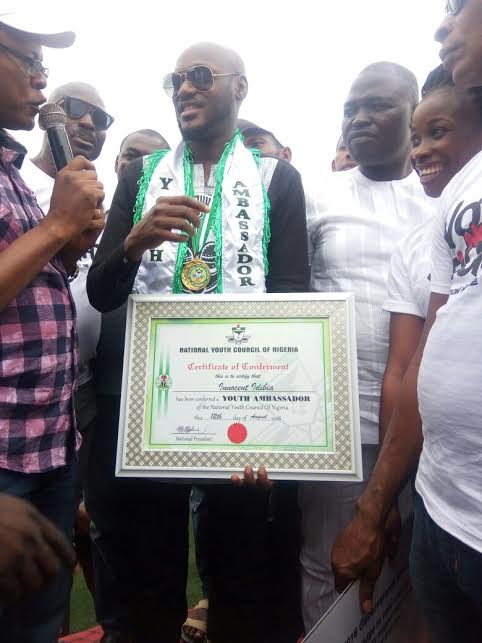 2Baba spoke at length to the youth, on the need to refuse being lured into violence by power hungry politicians and enjoined the gubernatorial elections candidates who were present at the session, to not adopt a do-or- die mentality towards the forthcoming elections. He further urged candidates to maintain the peace despite the result of the elections. The speech was met with a rousing applause from his audience after which he made both candidates and youth sign the VNF pledge form and make public statements to show their commitment to the VNF campaign.

The award winning songster also embarked on a media tour to propagate the message of non-violence during elections. This  followed  the very successful first phase of the ‘VOTE NOT FIGHT’ campaign. His first stop was at the ITV studios where  he discussed the ideals of the ‘VOTE NOT FIGHT’ campaign with TV host, Emmanuel Akpolohor. He proceeded to Raypower 105.5fm studios also in Benin city, where he shed more light on the workshop and rally held on the 11th of August, 2016.

Intel Launches “With A Computer, You Are ...