One of the four suspects arrested in connection with the gruesome murder of a member of the Oyo State House of Assembly, Gideon Aremu, on July 1, 2016, Ayobami Adedeji (23) has disclosed that they were mere robbers and not assassins as it was insinuated.
Adedeji and three other suspects; Adediran Oladapo (31), Kareem Isiaka, and Sodiq Adedeji (20) were paraded by the Oyo State Commissioner of Police, Leye Oyebade at the Police Command headquarters, Eleyele, Ibadan on Monday.
The lawmaker from the Labour Party, representing Oorelope constituency, was until his death the Chairman, House Committee on Information, Public Relations and Security.
He was killed in front of his house in Alakia area of the state as he alighted from his car to open his gate. Three gunmen on a motorcycle were said to have trailed him to the house and shot him severally after a brief argument according to family source.
In an attempt to quicken the arrest of the killers, the state Governor Abiola Ajimobi placed a N5m bounty on the heads of the gunmen responsible for the murder of the lawmaker.
Narrating how the lawmaker was killed, Adedeji said they did not know the status of late Aremu before one of them called ‘Abbey’ shot him after collecting his mobile phone and money.
According to him, we met at our usual Awo joint in Beere area, Ibadan, to carry out a robbery operation at Adegbayi, Ibadan on that fateful day.
“We did not track the lawmaker to his residence but it was one of us called Abbey that his mother reside in Adegbayi that brought the job to rob the lawmaker to us. I did not know why Abbey shot him, but the only thing they gave me was N40,000 which was my share of the operation.” he said. 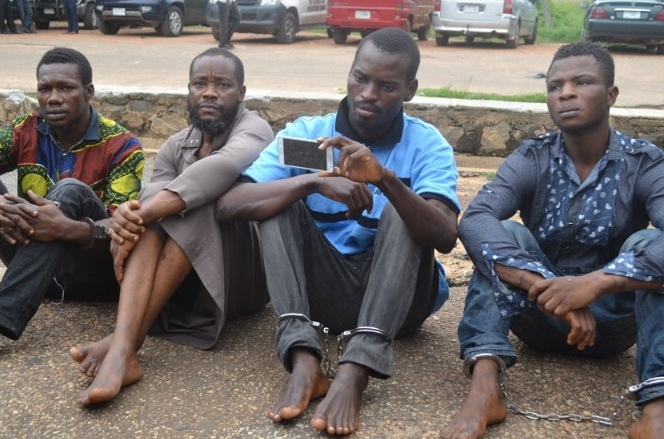 Adedeji who also confirmed to be an ex-convict said he is was jailed last year for selling Indian Hemp but was later pardoned after spending a year at the Agodi prison in Ibadan by the State Attorney General.
The suspect claimed that he became friends with Abbey, Kola Mission, Yusff Ikire at Awo joint, around Ogunmola compound in Beere after he was released from prison.
He noted that on the day they killed the lawmaker, they took off from the Awo joint after consuming Indian Hemp served to them by one Dele Awo.
But one of the arrested suspect, Sodiq Kareem, who is a criminal receiver claimed that he was not aware that the killed lawmaker’s phone he bought was a stolen one.
“It was Kola and Yusuf that sold the lawmaker’s phone to me for N12,500 but I could not make use of the phone because it was locked and has a security code, so I gave it to Kareem Isiaka aka Alfa to unlock for me or sell. Alfa sold it to Adeniran Oladapo for N16,000” he said.
Also, Alfa confirmed collecting the phone from Sodiq to sell but did not know that it was a stolen phone.
Oyebade said that the arrest was made possible by a combined team of Intelligence Response Team of the Inspector General of Police, Ibrahim Idris and detectives from the Oyo State Police Command.
“The suspects did not have the knowledge of the status of the lawmaker. As robbers their intention was to rob him of valuable property in his possession. The victim was killed because they thought he could identify them due to a torch flashed on them during the operation.” he said.
The police boss declared wanted three of the fleeing suspects which includes; Abbey, Kola Mission, and Yusuf Ikire, adding that anyone with useful information that could lead to their arrest should contact the police command.
He saluted the patience of the family of the victim, the understanding of the state government and the people of the state.
Oyebade assured that no criminal will commit crime of any magnitude in the state and get away with it.
Lauding the effort of te police, The lawmaker representing Ibadan North State Constituency II, Mr Olaleye said the effort of the police in the arrest of his colleague is very commendable.

“It is very clear to the world now that Honourable Aremu was not killed politically but by arm robbers. It’s not up to two months now and they have expose the face of this evil perpetrators and am sure those that flee too will soon be caught” he said.
Also, Oyebade commissioned? the Secretariat of the Police Officers Wife Association (POWA) and a new police station in Ogungbade, Ibadan.

PHOTOS: ABUJA STANDS UP FOR MTV BASE ...