Ooni of Ife is disrespectful to the throne – Seun Kuti

Afrobeat singer, Seun Kuti, has lambasted the Ooni of Ife, Oba Adeyeye Enitan Ogunwusi for referring to Jesus as his father.

It would be recalled that Oba Ogunwusi had said: “Jesus is my father” at a church service earlier this year.

But Seun in an interview with SAHARA TV said: “ What happened to respecting the throne?”

“ This a shame to the monarch and the Yoruba race.

“ It is an embarrassment to a throne that is older than him.

“ That is older than his lineage and even anything he knows.

“ He cannot make such a statement without a consensus.” 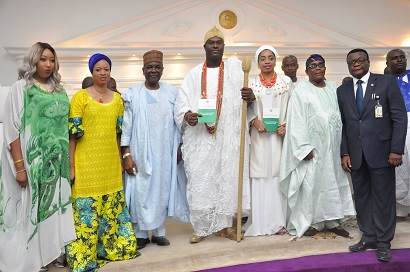 The son of the legendary singer, Fela Kuti further said that a king who has performed ritual rites has no right to refer to Jesus as his father . He said, ”Yes, he is the king of all religion. His duty is to protect the citizens and respect their rites to free religion than pander to one religion by going to worship with them.

”Imagine the Queen of England making a statement that, “The pope is her father.”

” by Swearing allegiance to the pope.”

“ She says she no longer believes in the archbishop of Canterbury and Anglican church of England.

“ That day she would leave the throne.

“ The British people also have Muslims but the Queen does not pander to them by going to worship with them.

“So for the Ooni to say he is the son of Jesus.

Speaking further, the singer also blasted the Oluwo of Iwo land, Oba AbdulRasheed Akanbi, over his claims that idol worship among monarchs are responsible for the crisis in the land.