British boxer hides broken hand for 13 years, but he still became a champion 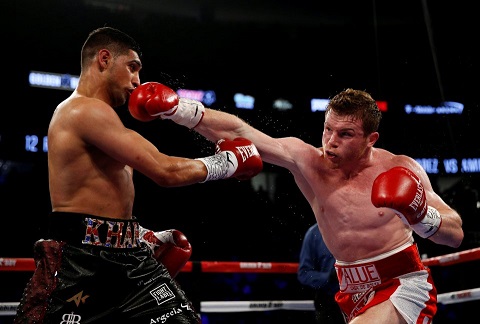 British boxer, Amir Khan revealed that he has been nursing a broken limb for 13 years, a condition that has incapacitated him from fully utilising both hands while in the ring.

The former world champ’s medical condition means he has never been able to unleash the full power of a right hook.

But today The Sun can reveal he has undergone an amazing operation to rectify the problem – and now Amir cannot wait to get his gloves back on.

Surgeons spent two hours taking bone from his HIP and grafting it on to his damaged right limb – holding it together with metal pins, as shown in these exclusive photographs.

It will be another THREE months before Khan’s ‘new’ hand has healed properly – and he cannot wait to start training again in October.

Today he talks candidly about the secret injury which has plagued him for over a decade and admits: “I’ve only been punching with 30 or 40 per cent power because it was so bad.”

The two-hour operation came in the wake of a brutal knockout by Mexican Saul ‘Canelo’ Alvarez which left the Bolton boy flat on his back and some commentators calling on him to retire.

But Khan told The Sun that quitting never crossed his mind and he is eyeing a big-money return to the ring in January.

Last night he said: “I kept the news of my hand injury quiet from everyone. I had to because I didn’t want any of my opponents to know about it, I didn’t want to give away an advantage.

“I didn’t want to go into those fights but I had to do it to become a world champion one day. Since then, I have never really thrown a right hand hard with all my might.

“I know people might question why I didn’t get the operation sooner but I couldn’t – I was too set on chasing my dream to become world champion and I was in big fights.

“I was one of the brightest prospects in the UK, the pressure was on me and I had to fight. I couldn’t afford to take six months off for an operation.

“I had to keep on fighting and keep myself busy. I didn’t want to take a step back because my dream to become world champion would have been delayed.”

Bolton-born Khan exploded onto the boxing scene with a silver medal in the 2004 Athens Olympic Games, which made him Britain’s youngest boxing medallist.

His star ascended, becoming one of the youngest ever British world champions five years later as he claimed the WBA light-welterweight title and went on to win fights by knockout an astonishing 19 times.

But knockouts at the hands of WBC champion Danny Garcia in 2012 and Canelo in May, where Khan had gone up two weight divisions, have left question marks hanging.

The dad-of-one, who has two-year-old daughter Lamaisah with wife Faryal, admits he has wondered how his career would have panned out without carrying an injured right hand.

He broke it in a quarter-final bout at the Junior Olympic Games in Louisiana, USA, in June 2003 after hitting a Cuban opponent on the top of the head.

And further damage occurred in his second professional fight, catching the elbow of Coventry’s Baz Carey in September 2005, leaving him punching with just 30 or 40 per cent of the power he was capable of.

It made him change his aggressive boxing style and weighed in the back of Khan’s mind throughout his career, fearing it could spell the end of his pursuit of glory.

Doctors told him the ligaments had worn away at the bottom of his metacarpal (hand) bones so Khan, with the encouragement of his wife, decided to go under the knife.

The two-hour surgery under general anaesthetic at Wrightington Hospital, Wigan, on June 8 left Khan bruised, in pain and with a three-inch scar on his hip.

He said: “After the Canelo fight I thought I’m not going to risk my whole career, I’m going to get this operation now.

“Every training camp I’ve done I’ve hurt my hand. I’ve had Cortisone injections in it and I’ve taken numbing agents for it.

“But I don’t want to live that life where I’m taking things in my hand to take away the feeling.

“I know in previous fights I have hurt guys with my injured hand, and doctors have said to me I was only punching with 30 or 40 per cent power because it was so bad.

“It has crossed my mind what I could have achieved without an injured hand. I would have more knockouts under my belt and I would have been a lot more confident going into fights.

“I am going to go into fights now knowing I have power in this hand and it is alright. That in itself is a massive confidence boost.

“I’m really excited to get in the ring and punch somebody in the face.

“I was knocked out for the surgery. I remember I got a little injection and the surgeon told me to close my eyes and relax a bit.

“I woke up a few hours later and I was in a lot of pain, I was drowsy and didn’t know where I was.

“When I tried to move I was in so much pain from my hip and I couldn’t understand it, but they reminded me they had taken bone from my hip to my hand.

“I was in so much pain. When the doctor told me I wasn’t allowed to have any more painkillers, it’s the first time anyone has said ‘no’ to me.”

Dr Mike Hayton, a consultant orthopaedic at Wrightington Hospital, Wigan, Gtr Manchester, carried out the operation alongside a surgeon in training from Melbourne, Australia, on June 8.

He said: “The ligaments attaching Amir’s metacarpals, or hand bones, to his wrist had given way. When he punched, his hand buckled behind the wrist.

“It meant he maybe wasn’t getting as much force behind his punches as he possibly could.

“We removed those joints at the bottom of the metacarpals, put in some bone from his hip and then screwed it together with pins.

“I made an incision a few inches long on the top of his hip, under the area where you would wear a belt on your trousers.

“In terms of size, the amount of bone we removed from his hip would probably fill a matchbox.

“He had been carrying this injury for some time, so hopefully the surgery will help him come back stronger.”

All eyes are now on Khan’s next move as boxing fans watch how he comes back from a brave but brutal defeat in his last bout.

Manny Pacquiao, who this week revealed he is set to come out of retirement, has long been mooted as a potential opponent for a box office blockbuster against the British boxer.

But Khan, who is planning at least three fights next year, has his eyes firmly set on revenge against Danny Garcia and the WBC welterweight belt.

He added: “I’m ready to fight the top fighters in the world. I’m number one mandatory challenger in the WBC now so I’d like to take that fight against Danny Garcia.

“That’s a fight I believe really has to happen. I’m owed that fight because I gave him an opportunity and he now needs to give me that opportunity back.

“I’ll be fighting at 147 kilos because it’s more natural to me. I won’t be going back to middleweight.

“Pacquiao would be a massive fight. I have had good sparring sessions with him and that was with a bad hand, so imagine if my hand was right.

“There are big names and I don’t want to fight those guys in America, I want to bring them to the UK for the fans over here.

“I want to come back to my roots and put on a big fight over here.

“I’m going to fight in January, in May and in December next year. I’ll get back in training in October. I’m counting the days until I can get back. I’m really excited to get everything over and done with.

“I don’t want to have any excuses when I retire, I want to go in there ready.

“I think I have a good six fights left in me and I will keep going on. I will call it a day when my body is not functioning the way it has been doing.

“I’m not going to let boxing retire me, I’m going to retire from boxing before it’s able to do that.

“I want to finish my career with no excuses. I don’t want to be going into fights thinking about having pain in training.

“I want to be comfortable with it because it hasn’t been like that for years. If I lose, at least I’ve given it my go.

“My career has been amazing but I want to see now what it’s going to be like with a good hand.

WATCH THE TEASER OF SOMETHING WICKED (PREMONITION) ...