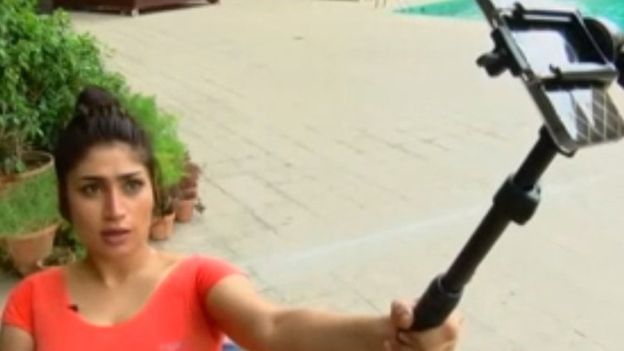 Ms Baloch, 26, recently caused controversy by posting controversial pictures of herself on social media, including one alongside a Muslim cleric.

Police say she was strangled to death.

Cases of women being killed for ‘dishonouring’ their family are commonplace in Pakistan.

Ms Baloch’s parents told The Express Tribune that she was strangled to death on Friday night following an argument with her brother.

They said her body was not discovered until Saturday morning. Her parents have been taken into custody, the Tribune reported.

Ms Baloch had gone to Punjab from Karachi because of the threat to her security, police say.

“[Her] brothers had asked her to quit modelling,” family sources quoted by the Tribune said.

Sources quoted by the newspaper said that Wasim was upset about her uploading controversial pictures online and had threatened her about it.

Police said he had not been arrested and was on the run.

Ms Baloch’s murder was condemned by filmmaker Sharmeen Obaid-Chinoy, whose documentary A Girl in the River: The Price of Forgiveness won an Oscar earlier this year.

“I really feel that no woman is safe in this country, until we start making examples of people, until we start sending men who kill women to jail, unless we literally say there will be no more killing and those who dare will spend the rest of their lives behind bars,” she told the AFP news agency.

Do you know the World’s best Airline?