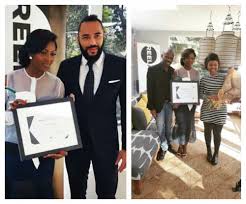 Entertainment artiste and Mavin Records singer Tiwa Savage won the “Hero of the month” Awards on Friday which was accorded her by Reel African in South Africa. She expressed her gratitude on twitter saying:

“Yesterday I was presented with “The Hero of the Month” Award by the lovely people @ReelAfrica. It was such an honour to receive this and it really means a lot to me. Making music is just part of my story. Touching lives and using my platform to make a change no matter how little is ultimately the goal and this award just reminds me of how important that is. A huge thank you to @Matthewmensah you’ve been such a sweetheart and an incredible help to me #i love SA #Siyabonga”.

The 36-year old who is currently touring the country was honoured by ReelAfrican, a content aggregator which specialises in making quality African content available to audiences across the world, with a vision to be the premier online destination for quality Pan-African film and TV content all over Africa. Believing in rewarding the producers, actors and musicians that are shaping Africa’s rapidly growing fashion industry while generating their revenue through very short ads prior to and within content.

Tiwatope Savage-Balogun (born 5 February 1980), better known by her stage name Tiwa Savage, is a Nigerian singer, songwriter, performer and actress. She is currently signed to Sony/ATV Music Publishing as a songwriter.

Savage signed a recording contract with Mavin Records in 2012. She co-wrote the track “Collard Greens & Cornbread” off Fantasia Barrino’s Grammy-nominated album, Back to Me. She was featured on Solar Plexus, a compilation album released by Mavin Records.

Her debut studio album, Once Upon a Time, was released on 3 July 2013. It was supported by the singles “Kele Kele Love”, “Love Me”, “Without My Heart”, “Ife Wa Gbona”, “Folarin”, “Olorun Mi” and “Eminado”. Savage’s second studio album, R.E.D, was released on 19 December 2015. It produced the singles “My Darlin’”, “African Waist” and “If I Start To Talk”. She sings in English and Yoruba.

Tiwa was born in Ikeja, the capital of Lagos State. Her family relocated to London when she was 11 years old. While attending high school, she was a trombone player for her school’s orchestra band. Savage had a healthy upbringing; she grew up in a multicultural setting due to her migration from Nigeria to the United Kingdom, and from the United Kingdom to the United States.

After graduating with a degree in Business Administration from the University of Kent, Savage started working at The Royal Bank of Scotland. She did backup vocals for George Michael at the age of 16, and lent vocals to other musicians such as Mary J. Blige, Chaka Khan, Blu Cantrell, Emma Bunton, Kelly Clarkson, Andrea Bocelli, and Ms. Dynamite, amongst others.

Furthermore, she has performed on stage with Sting, 50 Cent, The Black Eyed Peas, Eminem, Robbie Williams and Destiny’s Child, to name a few.

The RnB singer enrolled at Berklee College of Music and graduated with a degree in professional music at the age of 27.