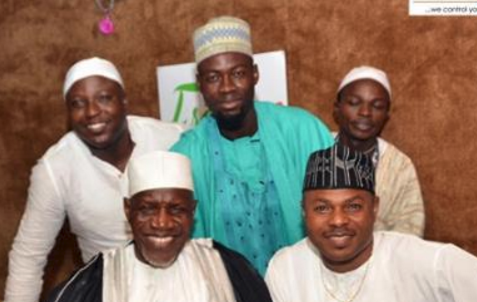 Popular yoruba gospel artiste, Yinka Ayefele has raised alarm over the rumours making waves since the beginning of the week that the singer has converted to Islam. This came after a few pictures were leaked showing Ayefele, who was dressed in a caftan posing with four popular Islamic clerics.

The news of his conversion to Islam spread like wild fire with many prominent personalities and men of God already making comments on social media about the issue.

The gospel artiste have come out through his publicist and media aide to debunk the claims.

A release issued by his Publicist, David Ajiboye said Ayefele is still a Christian and has no reason whatsoever to renounce his faith and belief.

The statement said: “We believe the rumour must have emanated from the annual Ramadan Lecture, which Fresh 105.9FM, owned by Ayefele, organized on Tuesday, in Ibadan.

“Our station, Fresh 105.9FM had invited popular Islamic preacher, Alhaji Muideen Ajani Bello, as the Guest Preacher at our annual Ramadan Lecture which had over 4,000 people in attendance and because of this, some naïve minds went to town to spread the rumour about Ayefele’s conversion.”

Ajiboye stated further that the station is for everybody irrespective of your religion, race or colour, adding:

“We believe its part of our social responsibility to organize such a spiritual rebirth programme to sensitize our Muslim listeners on the ideals of Islam most especially in this holy season.”