Did Banky W have a secret wedding? 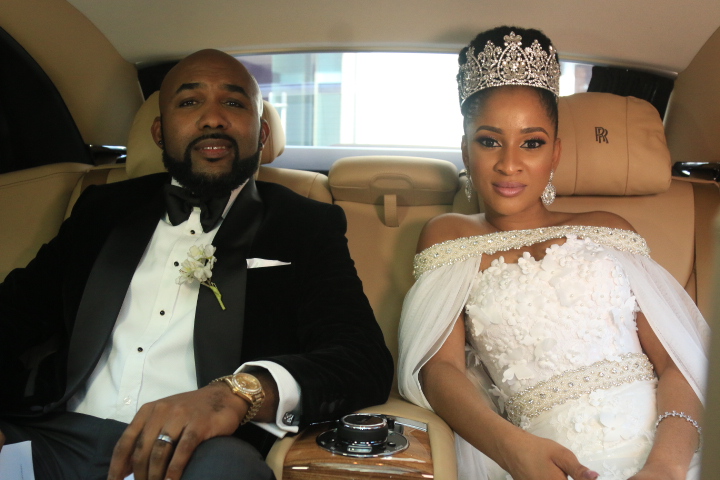 Did Banky W, who is unarguable Nigeria’s most eligible bachelor (judging by looks of course) engage in a secret wedding? The EME boss who has in recent times being a celebrity best man, a few weeks back confirmed that all his friend were married and he was the only ‘guy without a ring in the circle’.

Well, when yours truly saw the wedding pictures, my heart skipped and the same thoughts that raced your mind, raced mine.

Well, ladies and Gentlemen, we can all relax. These are not pictures from Banky W’s wedding but rather, they are leaked pictures from a new movie in which he is a cast.

The movie  ‘The Wedding Party’ a new romantic comedy starring Banky W and Adesua Etomi as an on-screen couple. Adesua Etomi plays ‘Dunni Coker’, a 24 year old art gallery owner and only daughter of her parents about to marry the love of her life, ‘Dozie’ played by Banky W. The couple took a vow of chastity and is looking forward to a ground-breaking first night together.

The set also boasts of other notable names like Alibaba and Sola Sobowale, who played the roles of Dunni’s parents, while Ireti Doyle and Richard Mofe-Damijo play Dozie’s parents. Other notable names in the stellar cast include Zainab Balogun, Ikechukwu, AY, Beverly Naya, Emma Oh Ma God, Lepacious Bose amongst others.

The pictures are leaked photos  from Day 1 of shooting and the movie is billed to be released to Cinemas in December this year. The movie is directed by award-winning filmmaker Kemi Adetiba, and Executively Produced by EbonyLife Films CEO, Mo Abudu.

Monday Motivation: Know What You Carry: The ...