E-Money, where you dey get your Money?

News making the rounds are that E-Money, who is the owner and financier of popular record label 5-Star Music sprayed over a million naira during the wedding ceremony of Super Eagles player, Onazi Ogenyi’s white and Sandra Ogunsuyi last weekend. Of course he couldn’t do that with his hands, he actually used a customized “money spray gun”.

Pictures from the event have floated around the internet like flood in Lekki Phase One on a rainy day. Indeed, the pictures are shocking! I have never seen so much money on the floor before. 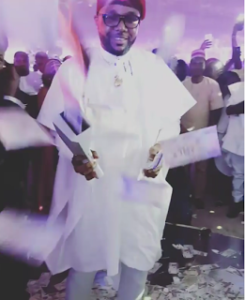 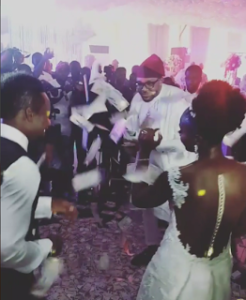 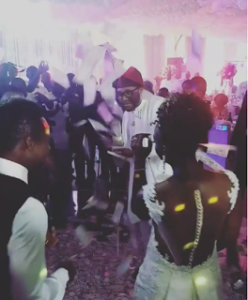 E-Money, where you dey get your money?

Known for his flamboyant and extravagant lifestyle, the entrepreneur lavishly sprayed the newly married couple using a money gun.

This is not the first time, the father of three will be pulling such. Two months ago, he was a guest at Mike Ezuruonye’s sister’s wedding and he also sprayed the newly married couple with a money gun.

It will be recalled that E-Money chose to mark the new year in his life by giving a shoe rack seller a brand new car and N300,000 cash.

The shoe rack seller, identified as Promise had encountered 5 star music act, Kcee who is also the younger brother to E Money, while on a stint selling recharge cards on the streets of Lagos, sometime last year.

Kcee had discovered that Promise who hails from Ebonyi state, had been hawking for over 6 years, and promised to help him out.

The Five Star music crew had gone in search of Promise who does his hawking around ‘Ikeja Along’, Lagos.

Just recently, it was revealed that E Money is now the proud owner of a 2015 Mercedes Benz Sprinter Luxury Land Jet.

“Congratulations to the baddest boss in the [email protected]_emoney1 . Just scoped a new whip 2015 model MERCEDES – BENZ SPRINTER LUXURY LAND JET. God bless your hand work and thanks for your unending support . #ebaeno” he wrote on Instagram.

Use Carrots and Sticks to get Militants, ...