After serving two years as Louis van Gaal’s assistant, Giggs has decided to jump into management himself and could be set to take charge at the City Ground.

Ryan Giggs is a shock contender for the vacant Nottingham Forest job.

It is understood that the Manchester United legend has agreed to leave the club he has served 29 years as apprentice, player and coach to take on his first permanent managerial role.

Giggs, 42, had been offered the opportunity to stay on at Old Trafford as part of new boss Jose Mourinho’s backroom staff – although not as No.2 with the Portuguese’s trusted lieutenant Rui Faria taking the position.

But after serving two years as Louis van Gaal’s assistant, Giggs has decided to jump into management himself and is now among the front runners to take charge at the City Ground. 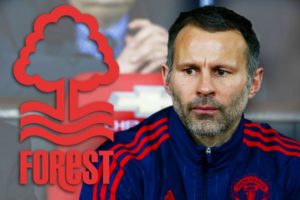 A host of Football League clubs are keen on Giggs, however, and he is not expected to decide his fate until this week at the earliest when his departure from Manchester United is understood to be officially confirmed.

Whether Forest will take a gamble on Giggs remains to be seen just now with the club also considering other available options – including a continental boss.

It’s believed Giggs decided his fate last week after pulling out of a planned trip to Euro 2016 to watch Wales’ defeat by England in Lens.

Giggs had a stint as caretaker boss at United when David Moyes was sacked in 2014.

His record was two wins from four games, including a draw and one defeat.

Giggs would hope to become a success at the two-time European Cup winners Forest, following in the illustrious footsteps of legendary manager Brian Clough.

Forest are fancied to be in the promotion picture this season despite finishing in 16th place last term.

And should Giggs be confirmed as their new manager this week, he will learn the club’s fixtures for the forthcoming campaign this Wednesday.

Precautions to go by this Rainy Season