The question on every one’s lips is what is Seyi Shay doing in the Caribbean?? The answer: this amazing lady has been invited to Jamaica by the world renown University of the West Indies.

She will be giving a lecture at the prestigious University, to student aspiring to take on the international Entertainment industry, after speaking with a head professor in the University Dr Sonja we were made to realise that our very own golden girl is an international inspiration, she will be sharing her knowledge of the business of music and giving tips and advice on giving back and maintaining who you are in the industry and remaining in your course, smartly. 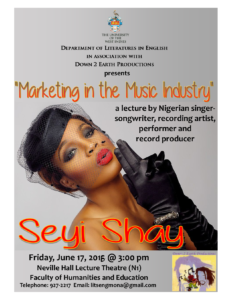 During her stay so far Seyi has been opportuned to converse and share knowledge with award winning Author Dr Sonjah Stanley Niaah and leading Professor in Culture and Arts Dr Caroline Cooper . 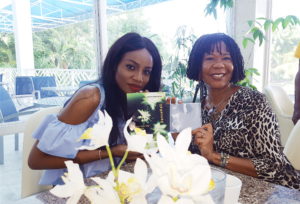 Her second day in Kingston saw her hanging out with award winning, number one selling singer song writer OMI who is now her “cheerleader” they caught up for a meeting to discuss future plans in his personal studios in uptown Kingston before he headed off for the second leg of his tour, I can see an amazing collaboration coming along.

All this comes at a time when Seyi Shay is focusing on her social responsibilities as well as her music and empowering the next generation and others with her story and support, this young lady is truly evolving before our eyes. 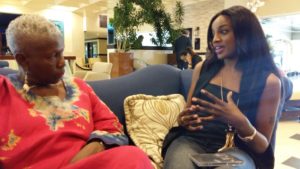 Seyi Shay is an international recording artist, song writer and performer currently signed to Island Records UK, she has made a name for herself as one of the biggest artists to come out of Africa.

Seyi Shay also known as Oluwaseyi Deborah Joshua was born on December 21st 1985 in London, UK to Nigerian parents. She spent the majority of her life living in London. Seyi Shay discovered her passion for music at an early age and also got some valuable exposure when she was 14 years old as a member of the London Community Gospel Choir (LCGC) headed by Basil Meade, they embarked on a 13 city tour in Japan where they performed in front of hundreds of people. 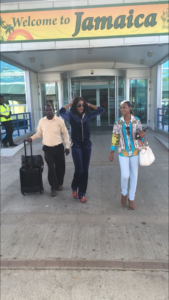 Her first involvement in professional music came in 2005 when she signed a recording contract with Sir George Martin Music famed for producing music for the Beatles and No Apologies Music . During the duration of her contract Seyi Shay was credited for writing and producing three major songs for the Konami Game Sound track; “Crime Life”, she also wrote the song “You will see” which featured on Mel C’s critically acclaimed album “Beautiful Intentions”.

Seyi Shay’s first big break came in 2008 when she was snapped up and became a member of the girl band “From Above” which was at the time managed by Matthew Knowles, father and former manager of Beyonce Knowles. The Band consisted of 5 female singers from inter racial backgrounds, they enjoyed a fair amount of fame and in 2011 they released their debut album titled “Breaking From Above” and went on to star in their own reality TV show that aired world wide on MTV. The band also supported Beyonce’s “I AM” tour in 2009/2010. Seyi Shay went on to work with Chipmunk, Puff Daddy’s “Dirty Money”, Justin Timberlake, Brian Michael Cox, TuFace Idibia, Bilal, Chipmunk, Rob Knoxx & Harmony Sammuels, she has also shared the stage with Chris Brown, TuFace Idibia, D’Banj, Rick Ross along with a list of superstars.

Seyi Shay’s career in Nigeria started in 2012 as she was introduced to the market by Flytime Entertainment and was managed by Cecil Hammond. She went on to release several singles; Irawo, No Lele, Loving Your Way, Chairman, Ragga Ragga, Crazy featuring Wizkid and Murda featuring Pato Rankin’ and Shaydee which won her many admirers both local and international. On July 23, 2015 Seyi Shay announced she had just signed an international recording contract with Island Records UK and that they will be distributing all her music worldwide, a month later she shared the same stage with Neyo in a duet performance that was televised worldwide at the 2015 MTV Africa Music Awards in Durban, she was also nominated as the “Best Female” and Crazy featuring Wizkid for the “Video of the Year” at the award ceremony.

Seyi Shay is also heavily involved in Charity and Philanthropy, in May 2015 she set up a foundation called ‘SHAY A RAY OF HOPE’ which she hopes to use to change the lives of under served children especially in Africa.

Gembu: Sweet Adventure for the Fearless