Lady Gaga to star with Bradley Cooper in new movie

OSG Admin
0
The 30-year-old pop star is in talks to appear with the actor, who has been nominated for four Academy Awards, in his new A Star Is Born movie reboot.

This would mark the biggest acting role for Lady Gaga, who won a Golden Globe for her role on the show American Horror Story: Hotel and was nominated for an Oscar for her music. She and Cooper, who is also making his directorial debut with A Star Is Born, have not commented.

The news comes about a month and a half after she and Cooper were photographed riding together on his motorcycle en route to a dinner at a restaurant in Los Angeles.

The Hollywood Reporter, which first reported about Lady Gaga’s negotiations, said the singer had tested for A Star Is Born in front of Warner Bros. Pictures execs and impressed them. The studio has not commented. 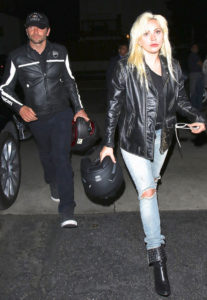 Beyoncé was formerly attached to the A Star Is Born remake and Clint Eastwood was previously set to direct it. The singer said in a statement in 2012 she hoped to work with him in the future. Cooper told E! News in 2015 he would himself be “honored” to work with Beyoncé “in any capacity.”

In the original 1937 movie A Star Is Born, Fredric March played a troubled movie star and Janet Gaynor played an aspiring young actress he helps find fame. The movie was remade twice—in 1954, with James Mason and Judy Garland and in 1976, with Barbra Streisand, 74, and Kris Kristofferson, 79.

All the actors and actresses except the latter two received Oscar nominations for their roles, while Streisand won an Academy Award for Best Music, Original Song for “Evergreen,” the love theme from A Star Is Born.

Lady Gaga received an Oscar nomination this year for Best Achievement in Music Written for Motion Pictures, Original Song for “Til It Happens to You,” from the campus rape documentary The Hunting Ground.

She made her big screen acting debut with a small role in the 2013 film Machete Kills and went on to star in director Robert Rodriguez’s 2014 movie Sin City: A Dame to Kill For. She also played herself in Muppets Most Wanted. This year, Lady Gaga wowed fans and critics and won a Golden Globe for her performances in American Horror Story: Hotel, her big TV show debut. She also stars in the FX series’ upcoming new season.

Oprah Winfrey shows off her 30 Pounds ...

There is no Key to happiness, the ...