Fast-rising model, Mayowa Nicholas set the record yesterday by becoming the first Nigerian model to feature in Dolce and Gabbana fashion campaign. The model posted on her Instagram page picture of herself posing with the designer’s bag and wear in Italian fashion city of Napoli:

Who is Mayowa Nicholas?

Mayowa Nicholas, the first of 3 children from Lagos state, Nigeria. She was scouted on her way to the saloon by model scouts in 2013 but couldn’t make it to the casting.
In 2014, she attended the Elite Model Look 2014 casting and was shortlisted to top 10 female finalist after which she emerged winner EMLN 2014 female category. She then proceeded to the world finals which held in Schenzen, China, where she also emerged Top 10 finalist. she automatically signed on to Elite Paris, Milan, Amsterdam, Beth Model Management (mother agency) and a host of others. 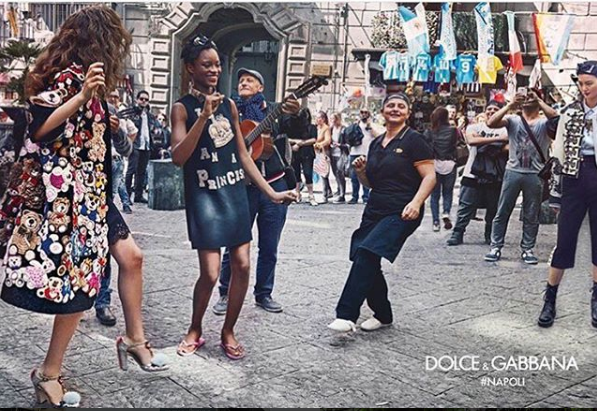 Her debut to the international scene was her feature on Vogue Italia, after which she walked at the Paris Haute Couture 2015, Milan Fall Ready to wear 2015, Paris Fall ready to wear 2015, walking for notable designers such as Hermes, Balmain, Calvin Klein, Ralph and Russo, Kenzo to mention a few. Dolce and Gabbana becomes the latest designer she will be outing for.