‘I Didn’t Rape Her, I Made Love To Her’ – Alleged Rapist Emmanuel Nwachukwu 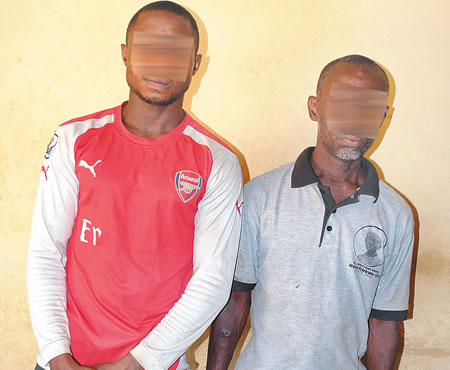 As gathered from Nigerian Tribune, A 52-year old constructor referred to as Emmanuel Nwachukwu, accused of rape have confessed to having carnal knowledge of a 12-year old girl in Suleja Local Government Area of Niger State.

Nwachukwu said that he did not rape the girl, but made love with her and the victim, who is a Primary 6 pupil said she was 15 years old.

He further stated that he was married and blessed with four children.

It was also revealed that Nwachukwu, whose wife is a close family friend to the victim’s mother, tested for HIV/AIDS after he was screened by doctors.

“I have tested positive to HIV/AIDS, but before the test was conducted, I did not know I had the virus,” he said.

Narrating his own side of the story, Nwachukwu said:

One afternoon in November 2015, Bright came to my residence when I lay on my bed .

She climbed the bed and was touching me. I asked what her problem was because I saw her as a young girl, but she responded that I would not understand. She kept on playing with me and when I could no longer hold myself, I made love to her.

According to Nwachukwu, after realising that the girl was wayward, “(He) started telling her that (he) was going to report her to her mother but she responded that she was going to tell her mother that I was the one that had been making love to  her.”

Another suspect, Chinedu Andrew, 22, who was also arrested by the police, confessed to defiling the teenager, saying that he was trying to advise her on the consequences of dating “a man old enough to be her father”.

“I used to see Bright with Oga Emma (Nwachukwu) sometimes in his house. One day, I asked her what she was doing with Oga Emma as I was always seeing them together.

I advised her against dating a man old enough to be her father and she replied that it was the man that was pestering her for sex,” he said.

Andrew, who is a friend to Nwachukwu’s son said that immediately after offering his advise, the victim started touching some sensitive parts of his body, after which he quickly stripped his clothes and  had carnal knowledge of her.

“It was Oga Emma who went and informed Bright’s mother that I was sleeping with her daughter. This made the woman to report the case at the police station and I was arrested.

I felt I had not done anything to warrant being arrested by the police because I felt I was innocent as the girl voluntarily agreed that I should be her boyfriend.

I also told the police that I was not the only one sleeping with the girl and mentioned  Oga Emma’s name,” Andrew continued.

The state Police Public Relations Officer, DSP Bala Elkana, confirmed the incident, saying that the Force will charge the suspects to court, as investigations into the case had been concluded.

Finally, CAN gets a new President