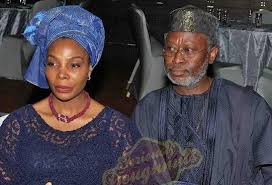 • Ex-beauty queen and socialite physician get intimate at public event

Tangled webs of a shared bond subtly entranced their minds. Silvery strands of passion quietly entangled their hearts, like searing flames of lust enticing estranged lovers for the umpteenth time. And by the time Nike Osinowo and Dr. Tunde Soleye were done mingling with each other, high society gossip projected the possibility of their reunion as lovers. The ex-beauty queen and Lagos medical doctor respectively, reunited recently at a fundraiser for Endometriosis.

The event which held at the Civic Centre, Victoria Island, Lagos, offered a rare opportunity for Osinowo and Soleye to bond since their separation in 2012.

The couple bonded openly with each other at the event where Osinowo spoke on how she had lived with the disease since the age of 13. Dr. Soleye on his part, revealed how he managed Osinowo’s health problems while they were together. He said he was used to the sight and smell of blood and that many times, while they were at functions, an elegantly dressed Osinowo would get up and ask him to check the back of her dress to see if there was a blood stain.

Many people at the event wondered if the estranged lovebirds were at the verge of reuniting given the affectionate way in which they related with each other. Will the duo get back together? Or did they simply put up a show for the public? Time will tell.

A muslim may become the Mayor of ...