Popular American comedian, Eddie Murphy is a new dad — for the ninth time! 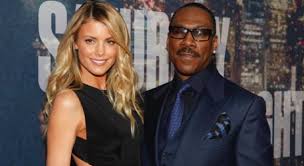 ccess, the comedian and his longtime girlfriend Paige Butcher welcomed a daughter on Tuesday morning, a rep for Eddie told Access Hollywood in a statement.

According to the statement, Eddie and Paige named their bundle of joy Izzy Oona Murphy, and the baby girl weighed in at 7 lbs., 15 oz. and measured 19 1/2 inches long

“Both mother and daughter are doing well,” the statement read.

Izzy is Eddie and Paige’s first child together. The Oscar nominee has eight other children from previous relationships, including five with his ex-wife Nicole Mitchell and 9-year-old daughter Angel with “America’s Got Talent” judge Melanie “Mel B” Brown.

He and Paige have been together since 2012