Yaw Returns With Eighth Edition Of “Yaw Live On stage” 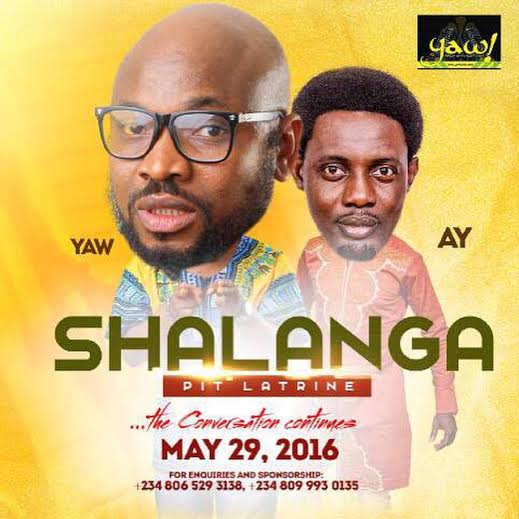 The eighth edition of “Yaw Live On Stage”, the flagship platform of media personality and comedian Steve “Yaw” Onu featuring the talents of several musicians and comedians including AY, Phyno, Burna Boy, Korede Bello and Solidstar is set to hold on Sunday May 29, 2016 at the Eko Hotel Convention Centre, Victoria Island, Lagos.

The centerpiece of the show is a humorous new stage play written and directed by Femi Branch titled “Shalanga”, which features the acting talents of Yaw and AY in a satirical take on the past and present of Nigeria in the last one year.

The show, which kicks off at 6pm on the day will be preceded by the red carpet which begins at 4pm. Tickets to the event can be obtained at yawnaija.tv & ariiyatickets.com.

“A lot of people do not know that I come from a Theatre Arts background and as such, I have a very keen interest in the complete spectrum of entertainment. This is what I have tried to achieve over the past 7 editions of Yaw Live On stage, and I believe this year’s event is set to be the best ever, incorporating a hilarious stage play, music, dance and comedy into a 360-degree entertainment experience for the audience. I want everyone to come out and have fun with me on the 29th. It is going to be spectacular.”