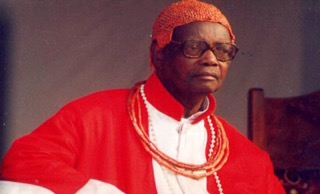 The Edo state government has confirmed the death of Omo n’Oba n’Edo Uku Akpolokpolo, the oba of Benin.

Governor Adams Oshiomhole, confirmed the death on Friday, describing it as a “huge loss”.

“Our hearts are heavy, laden with pains and grief, at the announcement of the passing on to glory of Omo n’Oba n’Edo Uku Akpolokpolo, Oba Erediauwa of Benin, our highly revered Oba, a distinguished Edo numero uno, an accomplished Nigerian, a seasoned bureaucrat, quintessential unifier, unique personage and exemplary Omo N’Oba, whose reign brought distinction, immense class, finesse and integrity to traditional institution in Edo state and the country at large,” he said in a statement.

“His carriage comes with an élan that was peculiar with the reverence of royalty. His uncommon courage was symbolic of the can-do spirit of the Edo mind. His unity of purpose was not in doubt even as he used his revered position to promote constructive engagement amongst all shades of opinion and culture in Edo state.”