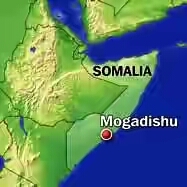 The car bomb went off just outside a municipal building in an attack which the terrorist group, Al Shabaab has claimed responsibility for.

Somali officials have confirmed that all the casualties were civilians.