10 Most Interesting Moments From #EtisalatPrizeAwards 2015 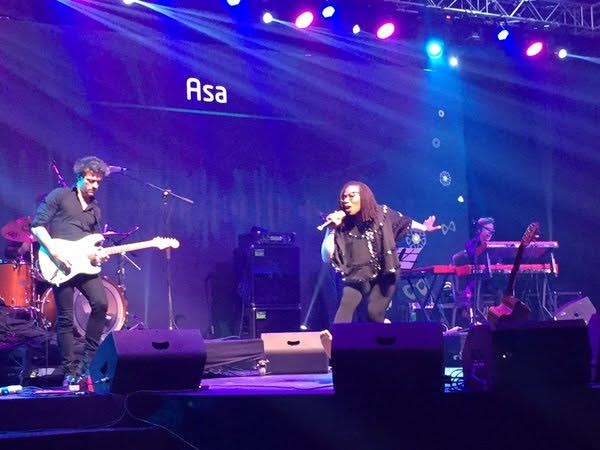 March 19, 2015 was a good fantastic day as people from all works of life gathered to celebrate the shortlisted writers of the flash fiction and novel categories of the Etisalat Prize for Literature.

See 10 of the best moments from the event:
1. K Peace performing the Fuji version of John Legend’s All of Me held the audience spellbound!

2. When Kuti Ojuolape Modupe was announced the winner of the flash fiction category of #EtisalatPrizeAwards

3. When Gloria Ibru and Keppy Ekpeyong Bassey spoke with South African accents during the re-enactment of Rehanna Rossouw’s What Will People Say?

4. When the audience looked into their goodie bags and found one book from the shortlisted novelists.

5. That moment when the dramatization of Tram 83 look like a night club thanks to Toyin Oshinaike and his cohorts

6. That moment when Fiston Mwanza Mujila reading an excerpt from his book sounded like the rendering of incantations

7. When Darey came on stage and played our best songs from his recent album Naked

8. Efe Paul Azino, world acclaimed spoken word artist (who came looking like a Yoruba Demon in his black Agbada) thrilled us with his performance of ‘Let Our Voices Ring’.

9. When you love Asa so much that you don’t want to let her go.

10.How can we forget that point when Fiston Mwanza Mujila, winner of Etisalat Prize for Literature 2015 danced with Asa?

‘Mournful’ we are not but… Hear it yourself from the author of Tram 83, Fiston Mwanza Mujila. pic.twitter.com/sw0hU2KUUn — Lola Shoneyin (@lolashoneyin) March 19, 2016

AliBaba Sold $462 Billion Worth Of Products ...