Management Responds To UNILAG Protest, Postpones Exams By A Week.

On Monday 29 September, 2015, the University of Lagos was in the news again. The school was in disarray as the students put the school on lockdown while preventing the free movement of traffic within the school premises. The cries started from Jereton Mariere Hall at about 3am when a male student woke up at night to see insects crawling on his body. Bedbugs they are called. This led to the students’ indignation and infuriation and eventually their protest through the school.

The day brightened up and by 7am the students were fully primed for a protest, they called on fellow students in halls like King Jaja, Eni-Njoku Hall among others to join in the protest. Students in the female halls, though plagued with rodents too, didn’t partake in the protest.

Our correspondent had the opportunity to speak to some students from some halls in the school community and here’s what they had to say. Some of them from Mariere hall (who would prefer to remain anonymous) said that the bedbug case has been on for about two years and even increased after the last fumigation exercise carried out during the first semester break. When asked if the bugs were only present in the beds, a student said “the bugs are present everywhere, in laptops, in/on the walls, in the roofs… they’re everywhere!”

The school management in response to this case has released a newsletter after an emergency meeting held on Monday September 28, 2015. They resolved to move the exams forward by a week so that the students can have more time to prepare for their examinations. The new examination date is 19 October, 2015 while lecture free week will now be from October 12-16, 2015. Fumigation would be done after the examinations so as not to disrupt the students’ preparations for them. 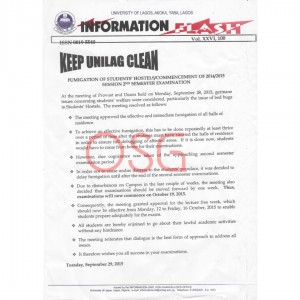 All in all, we’d like to advise the students to take time out to iron their clothes as heat helps to stop the Rodents action. One of the Hall staff also advised the students to carry out more sanitary activities as it would reduce the Mosquitoes and other rodents’ presence in the hostel.