It was a momentous occasion as the practitioners in the film community in Nigeria, representatives from corporate organizations and gentlemen of the Press, converged at Silverbird Galleria in Victoria Island on August 14th 2014 for the official unveiling of Lancelot Oduwa Imasuen’s historical movie, ‘Invasion 1897’.
The event was well attended with the hall packed full of people, eager to see the offering from the maverick director. After nearly 4 years in production, anticipation was high for the film’s outcome. The movie is did not disappoint; as clips of it rolled unto the screen, it received a hearty round of applause from all in the house. The new trailer and poster were also veiled to the delight of many. The event was superbly Mc’ed by Uti Nwachukwu who introduced all in the house and gave those present, an opportunity to make their observations and express their thoughts on the film. Some of those present include Mrs Aanena Jemitola, Commissioner for Arts & Culture in Edo state, Zik Zulu Okafor, President of Association of Movie Producers (AMP), Fred Amata Acting Festival Director of the Abuja International Film Festival, Emem Isong, Osita ‘Paw Paw’ Iheme, Emma Isikaku, to name a few.
The World premiere tour of the movie will start with the Toronto African & Music Festival on the 27th of August 2014 where ‘Invasion’ will be the opening film of the festival. There will then be a London VIP premiere alongside major Benin bronze works exhibition on the 13th of September 2014. A main premiere will be held in London at the Odeon Cinema also that month. This will be followed by a special premiere of the movie at the famous Smithsonian Institute in Washington, D.C on September 17th 2014. Back home in Nigeria, the film will screen at the Abuja Film Festival, then there will be there will be special Nollywood premiere on the 23rd, 25th and 26th of September 2014. The movie will premoere on the September 30th in Lagos and start screening in cinemas nationwide as from October 1st 2014. Proudly supported by South Atlantic Petroleum, HP, Task systems and FEVA Tv, Canada. 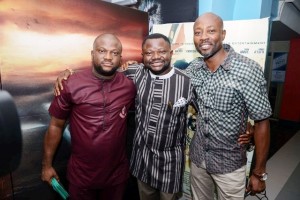