Jealousy is no joke! Student, 21, Found Guilty Of Throwing Acid

The horrific injuries of a Victoria’s Secret worker who had acid hurled in her face have been revealed as her childhood friend has been found guilty of carrying out the attack while disguised in a Muslim veil.

Mary Konye, 21, stalked Naomi Oni from the lingerie store where she worked after her friend had likened her to a monster from a horror film.

Miss Oni, also 21, was scarred for life after Konye doused her with concentrated sulphuric acid near her home in Dagenham, Essex.

CCTV footage obtained by police after the attack showed Konye in a niqab following her as she left work at the Victoria’s Secret shop in Westfield shopping centre in Stratford at around 11.30pm.

She suffered serious burns to her face and chest, lost her hair and eyelashes, and required skin graft surgery to cover the burns.

The jury at Snaresbrook Crown Court reached its unanimous verdict following around seven and a half hours of deliberations after it was sent out yesterday afternoon.

Miss Oni’s mother jumped from her set and appeared jubilant at the verdict. 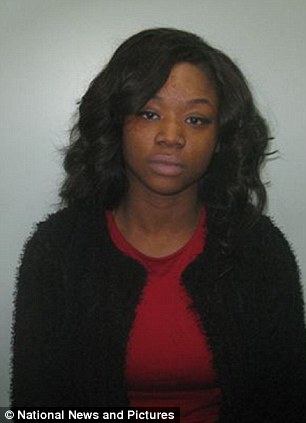 Judge David Radford adjourned sentence until March 7 while psychological reports are prepared and said: ‘In ordering these reports my judgement is that in all likelihood the case well lead to a substantial custodial sentence.