Samsung Wraparound Screen Next Year: Rumours abound that new Galaxy model could have a THREE-sided screen

The latest version of Samsung’s Galaxy smartphone could have a three-sided display, rumours suggest.

The new smartphone, which is tipped to launch next year, might sport a wrap-around display so that content on the curved screen can be read from extreme angles.

The display is likely to feature on Samsung’s Galaxy S or Note luxury handsets, but it could even be the first of a new line of curvier handsets, according to the rumours. 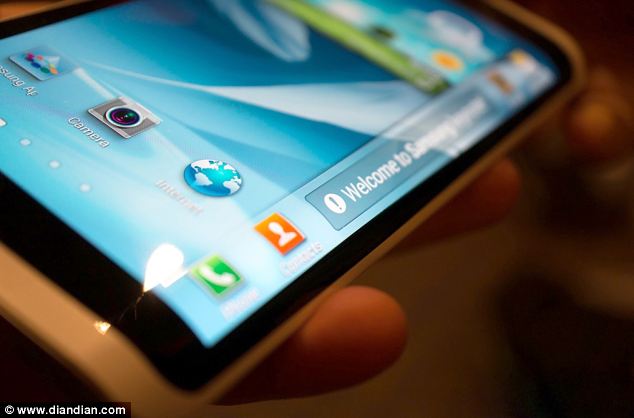 Samsung showed off its curved screens (pictured) at the Consumer Electronics Show in January. Here you can see how the curved edge of the display is being used for buttons and a rolling message to maximise space

A wraparound screen gets rid of dead space at the side of a handset, allowing for a larger display without a wider phone.

The innovation allows for more innovative smartphone designs to give consumers something different.

Curvier handsets could be more comfortable to hold and the screens easier to read.

Some concepts have shown home and command buttons positioned on the side of handset screens – as well as caller ID and rolling news.

By making use of the side of handsets for pop-up alerts, it enables a user to be able to multitask more effectively.

However there is currently no release date for the next generation device, although it is likely to be launched in the second half of 2014, the sources said.

The sources believe each side of the display could operate independently, which could make for a radical new experience for a smartphone user.

Samsung sells around one in three luxury handset and is locked in competition with Apple to showcase the latest technologies in its smartphones.