Fans of Talia Joy Castellano, who tragically lost her six year battle with cancer last Tuesday, are campaigning for MAC cosmetics to launch a make-up line in her honor.

Just days before the 13-year-old YouTube beauty sensation passed away her mother posted her ‘bucket list’ of wishes to Facebook. ‘Have my own MAC collection,’ was at number 62.

As news of her death broke fellow teenager Lauren Vennes launched a Change.org petition to help her see out the dream and to date the campaign has garnered 1,437 signatures.

‘She has gone through so much in her life and the one thing she wanted to accomplish is putting her handprints and footprints in the world,’ Miss Vennes’ letter to MAC reads.

‘We should make one of Talia’s dreams come true whether she is here with us today or not, because she deserves every second of it.’

Some supporters have suggested the beauty giant, who regularly launches limited-edition ranges, could donate part of the proceeds from the ‘Talia line’ to cancer research.

Adrienne Zazulak of Canada wrote: ‘Talia is an inspiration. If my makeup purchase could help a childhood cancer charity, in her name, AND achieve one of her dreams? I’d buy that any day.’ 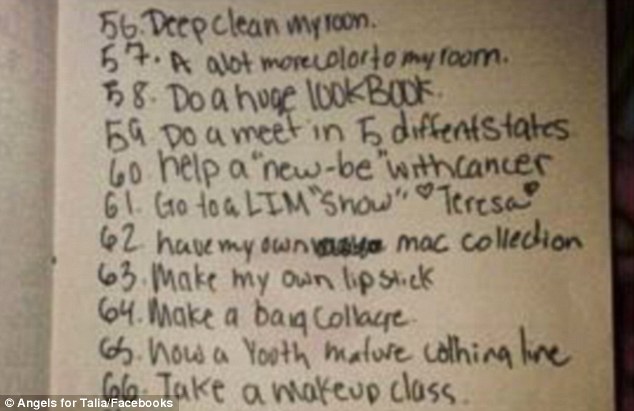 Hopes and dreams: Just days before the 13-year-old YouTube beauty sensation passed away her mother posted her ‘bucket list’ of wishes to Facebook and number 62 read: ‘Have my own MAC collection’ 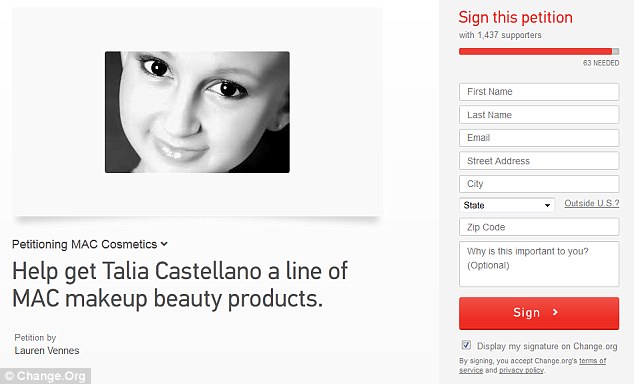 Fulfilling her wishes: The Change.org petition in Talia’s memory has garnered 1,437 signatures to date

And Irra core from Oxnard, California, added: ‘Lets make this happen for Talia. I don’t generally buy MAC, but if you have her collection, I will be a faithful client! And lets help other pediatric cancer patients with some of the profits.’

Talia, who suffered from two forms of cancer – neuroblastoma and leukemia – had 74 items on her bucket list, which included giving flowers to a stranger and going to a Justin Bieber concert.

‘I don’t generally buy MAC, but if you have her collection, I will be a faithful client!’

Since she passed away fans have been busy living out her unfulfilled wishes and posting photos to Facebook. An album on Talia’s page called #taliasbucketlist shows people doing everything from having cake fights to getting a tattoo and covering a car in sticky notes.

‘Talia is everywhere you look and we couldn’t be more pleased. And we especially know she is loving all the attention’ her family explained the day after she died.

They added: ‘Thank you for keeping her spirit alive and showing her family that her message and voice will continue to make an impact across the globe.’

Talia, who would have turned 14 on August 18, had attracted a large following thanks to her upbeat attitude.

Dubai Rape Victim Who Was Jailed For ...