We love anything food, prepared with all sincerity. We may suck at rendering romance to our women but we can tell what a good meal tastes like. And every woman knows that too, especially a Nigerian woman. When the world out there does not favour us after a hard day toil we expect to return home to find a delicious meal on the dining table, smoking, literally, with great aroma or something similar, maybe complimented by some perfect smell of awesomeness from a hibiscus flower from the flower-vase in the sitting-room while we smile, rubbing hands, anxiously awaiting a meal of Pounded Yam and Goat Meat pepper soup, complimented with scent-leaf.

What a perfect table for an Ogoni boyfriend.

Men wish to sit next to the women they love and munch their favourite meal, happily, without being disturbed with politics, the economy of a boring nation or sports. When a man is eating his desired meal he could as well be away on a mission to another planet as his attention is concentrated on that food solely. I am like that. When I have a delicious meal before me you will have to bring the complete episodes of Basi and Company in 3D to get my attention. Life is too short, abeg!

Nothing comes next to good food, after sex and money in a man’s life, except some great poetry by Rumi, maybe, for freaky poets. Once a woman can cook perfectly she can control the world of any man, even a celibate. She knocks down the senses of such a man with a well prepared dish. 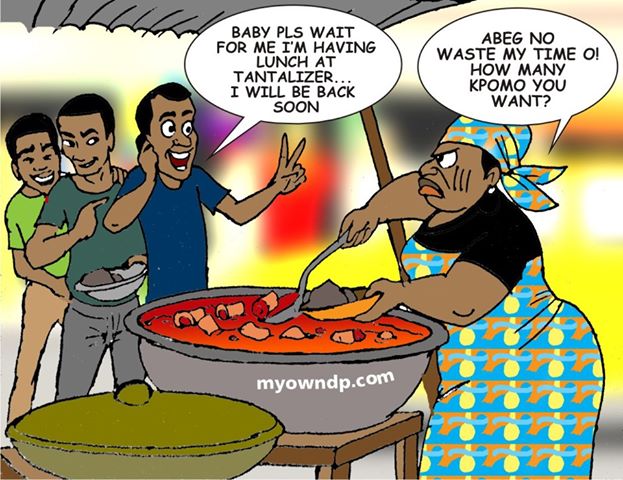 The creative ability to cook is an exceedingly awesome one. No woman is ugly until she cannot cook a decent meal. But a lot of the time we manage. What are boys for! Come on, endure some more, joy comes in the morning. Try a smile even while struggling through a bad meal, maybe for excessive salt, order some more water, and water the soup! Do not complain. It is a woman’s world. You could be grounded, man.

I love good food so much. I love its aroma, I love the way it is prepared and most definitely I love the woman who prepares the food. I love my girlfriend. Hey, who would not? Who would not love his spouse? The people of old, I am sure, worked great magic with food, good food, I mean. There was no mini skirt, and there was no lips-gloss which brightened the lips of a woman therefore making her so attractive. There was no great sense of sexual (re)-orientation like there is now. You were either a great cook; dexterous dancer, a singer of folklore or some great farmer or skilled craft person to attract a man. Today you have to go naked and bingo, you have the world staring at you, inviting you home for marriage. My great-grand father was a special character. His spot was in food.

Though he had lived over a century when I met him, he never lost a knack for delicious meals. While he cursed any woman who failed to hit his taste bud with some ‘out-of-this-world’ dish, he was wise enough never to say it in public. In short he warned me never to speak badly of a woman’s meal in public. If it was good, it was my luck. If it went awry it was also my bloody luck. He said, you should compliment a woman in public when she has done awesomely well in the kitchen or wherever but never the reverse when something goes wrong. The man was as intelligent as his olfaction.

When he was upset he was easily won over by his ability not to give up a great meal. His daughter, my grandmother was a special woman. She traded in dry-gin and occasionally invited me to taste some while assisting her cooking. My great-grandfather tasted some dry-gin but it never obstructed his reproach of a meal when it went left. He spoke secretly to me but warned me that my generation would be worst. I guess my mum had won my dad’s heart with a meal. Just like my dad, a woman had won my heart too with a meal.

Good cooks, especially women, could be mischievous with good meal. A woman comes to your house, and while you are admiring her curves, appreciating Olodumare for not letting the rash Obatala create your pretty wife, she would just walk straight into the kitchen, forgiving what makes you a man. Your mind is switched from sex to reality when moments later you are invited by an irresistible aroma which literally drags your throat on the floor of the kitchen like a dead rat by a cat.

If you have a woman who cannot cook you are best as dead. You will live your life in an eatery, drinking juice and eating biscuit until your system is ruined. Good food brings you good thought. With it comes good and long life. I love food, biko!

Food is the best gift to man after life. When you eat good food you would be happy. If you want a piece of a man’s heart, give him food. Give him enough food, enough sex and you would have enough of his stupidity in a large quantity. I rarely get enough of the latter but food. I love food. And I adore women who can cook. I treasure such women. I make a mental photograph of them and hang it everywhere I take my mind. Some Ewedu Soup, Egusi with Okporoko, some roasted bush meat, well spiced snail, pounded yam, fufu et al, with all these you can ask us to hug a transformer and we would do it heartily, expecting more transformers. Life is good with good food.

My girlfriend knows I love food. When she sees me angry she knows I am hungry. She walks away for as long as it takes to get a meal ready and when she appears with a tray of food my heart leaps in quick successions. She could look into my eyes and tell me what particular dish I would love at an exact time. She does not encourage my eating junk. No, that is a death sentence, though in instalment, to any man. No woman who wants the best out of his man would encourage such. When you eat properly, I mean a well prepared meal, not some Instant Noodles, you would be glad to be a Nigerian spouse. My appreciation for Nigerian women transcends their physical appearance; the chocolate skin, the plump body and greasy thighs. When a woman can cook she steals my heart.