Producer K Solo showed off another woman on his Facebook page as his love and new fiancee, less than two months after he and pregnant wife, Kikelomo Oyeniyi came out to talk about their publicity stunt.
Welcome to Ksolo’s Africa Magic Movie.. What happened to his marriage with Kikelomo after the ‘Publicity Stunt’?
His new fiancee  name is Bimbo and they got engaged on October 22nd, 2012. Whereas Bimbo and Ksolo were dating before he got married to Kikelomo. They used to attend events and parties together before he announced his wedding plans to Kikelomo. 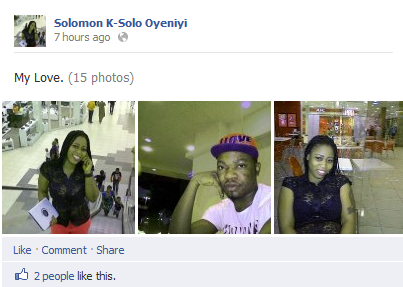