Loose Kaynon has been doing his thing for a minute now and if you know about music you will know  he has nothing short of special on the mic.Here is a short interview with him as he prepares to dazzle his fans at One Mic Naija Independence Edition.

Before you joined Loopy records, you were in a clique “Bach Boys”, what led to the break up?
There was no break-up per se, 20bucks relocated to the UK to join his family and bugzy just concluded his masters in the UK too.

As a rapper, how do you intend to connect with/entertain impatient Nigerian music fans without compromising your standard?
I’m just trying to tell stories that are real to me thru my music and I think that true fans of music respect music that is good and genuine!

I’m aware you’re working on a rap project titled “The Gemini Project”. What is it all about?
The Gemini project is a collection of thoughts, emotions and ideas of loose kaynon captured in song form.
Its geared towards feeding the loose kaynon fan base as I haven’t put out music in a while

But up till now, you’ve got no lead single; why is this so?
The creative process can’t and should not be rushed so I’m less worried about rushing out a single and more focused on the quality of the entire project. 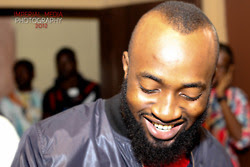 As a rapper signed to Loopy Records, how do you cope with the immense pressure to match/surpass M.I’s success?There can never be another M.I and there has never been a loose kaynon. I’m more worried about matching my very high expectations I’ve placed on myself

You’ve been around the Nigerian music scene since 2008, what made you persist for so long till you officially signed a record deal?

Music to me has always been a passion. Listening, recording and performing music has always been what drives me so if I didn’t get a record deal I’ll still be working on my art because that’s what makes me happy.

Very few Nigerian artistes excel during Live performances; how do you intend to make your performance spectacular?
Performances are about energy and communication, I try to feed off the energy of my audience and communicate as well as I possibly can.

As the host of wax lyrical, open mic performances shouldn’t be new to you. You’d also be expected to endear a host of rap fans; so how do you intend to make this work?

Every show brings with it its own type of energy and type of crowd and I look forward to that challenge not just to endear rap fans because there are going to be people there who might not fancy rap but it’ll be my job to carry them along.

Why should anyone look forward to your one mic performance?
If they miss it they’ll have to be told how great it was and everybody loves witnessing greatness 1st hand. Lol!!!

What could make you render a sub par performance?
I dunno, not tryna jinx it.

Don’t forget One Mic Naija is this sunday at Browns Cafe Ikeja  GRA.. Don’t miss it!!!! Check the flier for more details 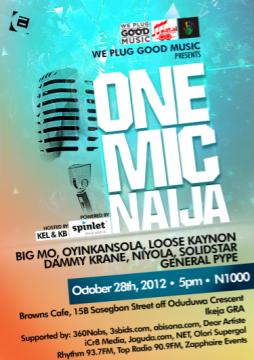