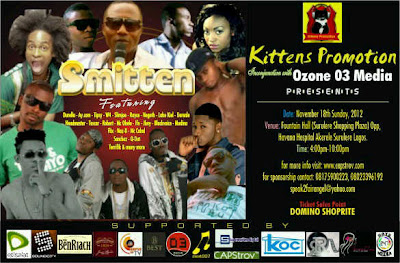 …a percentage of concert profit to go to charity
Channel O presenter, Denrele Edun, Kontrol crooner, W4 and the King of the Zanga, Durella have open up on the upcoming 2-in-1 musical concert for youths and orphans which is scheduled for Sunday, November 18th, 2012 at the popular Fountain Hall (Surulere Shopping Plaza) opposite Havana Hospital, Akerele, Surulere, Lagos from 4-10pm.
The concert is being packaged by Kittens Promotions in conjunction with Ozone 03 Media. Kittens Promotion is managed by Damilola Adegbuyi, a dynamic young lady, a graduate of Olabisi Onabanjo University, Ogun State and a mother.
The organisers of the event have revealed that regular tickets for the concert is N2, 000, VIP is N5, 000 while Captains’ Deck has been pegged at N10, 000. Concert tickets can be purchased at Domino (E-centre) Stores or online at www.capstrov.com. Other stars billed to perform include Rayce, Tipsy, AY.com, Jboy, Mudina will all be at the concert.
Denrele gave his thoughts on the upcoming event ‘’I will be there to entertain people as

usual, these people need our love and care, let’s not deny them’’. Durella went on to say ‘’the ‘Zanga’ will be hot that day as I intend rocking the stage for all the youths present’’. In the words of W4 ‘’I will be there to give my all as usual and also to show love’’.

As part of activities designed for the event, Kittens promotion will visit some of the orphanage homes and present gift items to the orphanages. The kids with talent in entertainment will be put on scholarship to further harness their skills. They will also be incorporated into the society which never cared for them as they will have the chance to meet with some of the best artists on display in the country. The concert will also provide a platform for them to be heard as some of them will light the stage.
In a statement signed by the PR Agency attached to the concert, Hoye247 Media ‘’we recognise the essence of showing love to those who are in dire need of it, this is the time for us to show the orphans in our midst that we truly love them and care about them, that is why we are doing this and a certain percentage of the concert’s earnings and gifts would go to charity. We implore people to get their tickets on time so as to avoid the rush’’.

Some organisations have thrown their weight behind the concert, the likes of Soundcity, City People, Ozone 03 Media, Campus TV, Super Maritime, KOC, Culture, Hoye247 Media Limited and others

CocoIce Storms The Dancefloor with Rock Me ...