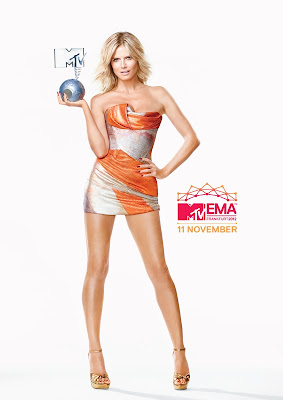 MTV has announced that Heidi Klum, one of the world’s most renowned supermodels and superstars, will host the “2012 MTV EMA”.  The multi-talented and multi-tasking entertainer and entrepreneur – whose accolades run the range from fashion guru to executive producer of a hit reality franchise – will be bringing her hosting A-game to the 19th annual awards show being held in Frankfurt’s historic Festhalle.

“I’m honoured to host the ‘2012 MTV EMA’ on its return to my home country of Germany,” said Klum, a native of Bergisch Gladbach, just two hours outside of Frankfurt.  “The MTV EMA is one of the biggest nights in global music, fashion and culture, and I’m thrilled to play a part in bringing this one-of-a-kind show to audiences all over the world.  We’re going to have a blast!”

“Heidi is absolutely one of the most successful and recognizable multimedia stars on the planet,” said Bruce Gillmer, Executive Vice President of Talent and Music Programming/Events, Viacom International Media
Networks. “She is very clearly the best choice to helm the ‘2012 MTV EMA’ in Frankfurt, and we’re looking forward to showcasing her incredible talent within the extremely dynamic EMA environment. It’s certain to be an unforgettable night.”

Africa’s hottest contemporary artists are also in the frame for an EMA award, as Sarkodie, Camp Mulla, Wizkid, Mi Casa and D’Banj fight it out for a slot in the Worldwide Act category, where they will compete against their peers in India and the Middle East (from Monday 15 October).  The final Worldwide Act nominees from each region (Europe, Latin America, North America, Asia Pacific and Africa/India/Middle East) will be announced the week of 30 October and the winner will be named at the show in Frankfurt.

MTV will announce EMA performers and presenters at a later date.

For all MTV EMA news and announcements, check out EMA on Facebook, follow us @mtvema  or download the MTV EMA app for free at the iTunes store.  For MTV EMA press materials, please visit press.mtvema.com