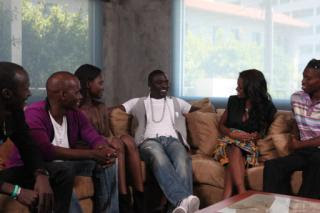 Among the topics discussed by Akon and the group are fame, ambition, education, how to find and develop
your talent, cultural cross-over and the importance of fighting for what you believe in.  Akon also talked about the importance of developing his art, the joy of collaborating with other artists such as Michael Jackson and The Fugees, his role in developing the careers of T-Pain and Lady Gaga and his latest reinvention – as a movie actor.

Like many of the previous panellists in the series, the youth involved in the interview were inspired by their meeting with Akon.

Comments Mark Gwamaka, “The great become great because they keep on learning all the time.”

“He has taught me to put the past behind me and focus and progress,” says Annah Mabasa.

Adds Catherine Nkonjera, “I love the fact that he talked about finding your talent ’cause even if it’s uncool you just have to do it.”

In each episode of MTV Base Meets…with MTN, ambitious young Africans from all walks of life pose hard questions to high-profile “thought leaders” about issues close to their hearts – in an intimate and informal environment, with no questions off-limits.  Topics on the agenda include entrepreneurship, education, youth culture, politics, sport, racism, gender issues and the African Renaissance. To date, youth panellists asking the questions have included students, journalists, bloggers, models, comedians, actors, musicians, humanitarian campaigners and poets.

To learn more about
MTV Base Meets…with MTN, or to view clips from the programme, please go to
www.mtvmeets.com or
www.mtvmeets.mobi.  Connect with the campaign on Facebook at
http://www.facebook.com/MTVMEETS or join the conversation on Twitter at #MTVMEETS.

Japheth Omojuwa, 24 other customers blacklisted by ...