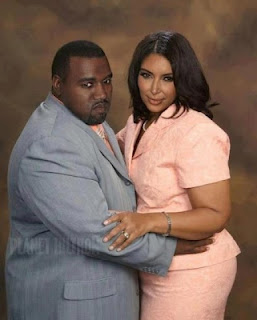 I hope this story is not true.. The ‘Mercy’ rapper is said to have urged the reality TV star Kimmy Cakes to slim down and shed up to 20 pounds. Kanye thinks his good friend Beyonce who gave birth to her first child Blue Ivy last January has a better body than his girlfriend of six months and is encouraging her to follow the singer’s grueling Dreamgirls diet, according to OK! Magazine.

A source close to the couple said: “He even suggested Kim drop 20 pounds, arguing that Beyonce has a similar shape and she proved you can get that supermodel body using her lemon juice, cayenne pepper and maple syrup diet.

“He says he wants her to be the face of his clothing line but to do that she has to fit into the clothes. It’s really uncomfortable her shape is what made her name.

“He has a long-term fantasy of turning them into the new Beyonce and Jay-Z power couple, but getting Kim to starve isn’t the way to do it.”

I feel sorry for Kim..