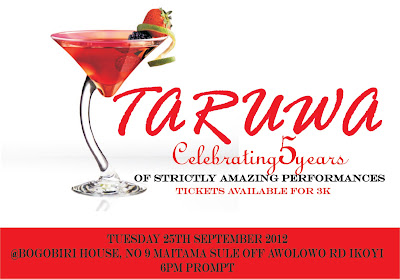 TARUWA clocks 5! The breeding hub for expression of talent, relaxation, and networking which started out as a little concept has over the years evolved into an immense experience and in celebration of its 5th anniversary, a special edition will hold on Tuesday, the 25th of September, 2012, at Bogobiri, with the theme POSITIVE TUESDAY

According to Lydia Sobogun, CEO of Gbagyichild Entertainment and convener of Taruwa, “Despite the numerous vices and occurrences in our country, emphasis for the celebration will be on our beauty as a people. We have decided that all performances must be positive with no horror stories or anything like that. Hence, the theme POSITIVE TUESDAY”

TARUWA [hausa for ‘gathering’] is a monthly gathering of art lovers which started on August 21, 2007 as a platform for young budding poets, spoken word artistes, actors, comedians, instrumentalists, and singers to express themselves. This gathering has successfully progressed into an avenue for groundbreaking, fresh and
promising talent. The show’s progress birthed its print version, a quarterly publication TARUWA Magazine, whose latest issue will be unveiled at the 5th anniversary event.

ABOUT THE EVENT – TARUWA AT 5

TARUWA [hausa for ‘gathering’] is a monthly gathering of art lovers which set off in August 2007, by Gbagyichild Entertainment CEO, Lydia Idakula Sobogun.

In its 5 years of existence, Taruwa has easily evolved into a breeding hub for new talent discovery; holding at the Bogobiri House every last Tuesday of the month and converging a positive and art endearing audience. The monthly event highlights the need for arts and culture promotion avenues to be created in Nigeria, and its success has birthed a quarterly print version, the TARUWA Magazine.

In its bid to encourage up and coming talents, Taruwa fuses performances from recognized acts with that of ‘up-comers’, making it a networking platform, as well as one to showcase talent.  Photographers, Producers, journalists, publishers, producers and other special service providers of the Nigerian entertainment industry can be found at TARUWA. Artistes like Mode9, Djinee, Snatcha of Rooftop MCs, Obiwon, Spoken word artiste Sage, Idols West Africa’s Omawumi, Eric and J’odie make up the list of Taruwa’s diverse talent breed; even Rapper Jude ‘MI’ Abaga first performed his hit track Safe – a song he had written a night before – at Taruwa

Taruwa can also boast of launching out new age career artistes such as writer/ poet Chiedu Ifeozo, and Singer Bez Idakula, amidst others.

Music and Culture bring the Caribbean and ...