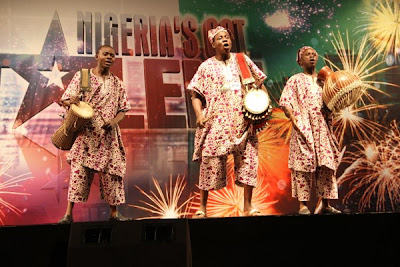 Forgive the viewers if they were spell-bound. The highly anticipated reality TV show ‘Nigeria’s Got Talent’  took display of talent to a whole new level when it hit the screen on Sunday, September 16, after touring through major cities in Nigeria searching for  the most talented Nigerians.The show premiered and will air weekly on Silverbird TV (6pm), TVC (9pm), AIT (10: 30 pm), Soundcity (DSTV, 6:30pm) and for viewers in the United Kingdom, HITV (8pm).The show took a thrilling twist as 11-year-old Toke Salami who was accompanied by her family members to the Ibadan auditions put up a heartfelt performance of a gospel song. Nathaniel wowed the crowd using his whole body, especially his mouth to produce a full range of beats, and the Ayan Agalu Cultural Group were also not left behind in the era of approval for the semi final stage, after showcasing their talent which involved passing messages across with the use of the talking drum.Some contestants were moved to the next round of the show but sadly, some like Stephen Faunwei; whose magic trick turned ordinary paper to a thousand naira – and the Ever Blazer group did not please the judges.The talent train made a stop at Port Harcourt, performers including the ‘Padlock Display’ by a man that calls himself, ‘Hero of Africa’ who hung padlocks on his eye lids. Just in case he hadn’t left both audience and judges
worried enough, he capped it up by inserting 4 inch nails into his nostrils. He was sent packing alongside a 24-year-old man who showcased what can only be described as a semi-dance (he called it modelling, however). Thankfully, another 24 year old, Marilyn Ogechi redeemed the garden city by showcasing a unique talent of playing the saxophone with her hands. She got a go ahead from the judges to the semi final round.“There are reality shows and then there are reality shows,” said the Project Manager, Adaora Mbelu. “The hilarity of some performances aside, in a country where there is an emphasis on lack of opportunities, it warmed the heart to see a wide range of enthusiastic, excellent performers, far beyond music. This is such an amazing country with truly talented people.”The Airtel sponsored show will air on TV stations across the country from September to December 2012. The Got Talent franchise worldwide, which is in its sixth year, has produced many notable performers in the last couple of years including Diversity, Bianca Ryan and Britain’s Got Talent’s 2009 1st runner up Susan Boyle, whose debut album became the fastest selling UK debut album of all time, selling over 3 million copies in the U.S.Nigeria’s Got Talent is sponsored by Airtel and supported by Cool FM, Wazobia FM, Nigeria Info 99.3 FM and Tasty Fried Chicken.