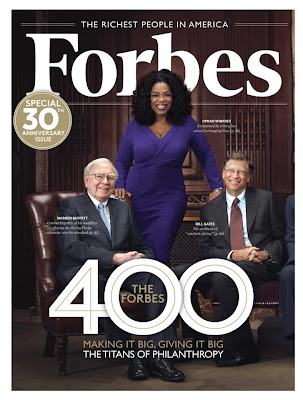 The 56-year-old philanthropist and tech pioneer is worth an astounding $66 billion. See the rest of America’s richest, here;

The net worth of the richest Americans grew by 13 percent in the past year to $1.7 trillion, Forbes magazine said on Wednesday, and a familiar cast populated the top of the annual list, including Bill Gates, Warren Buffett, Larry Ellison and the Koch brothers

The net worth of the richest Americans grew by 13 percent in the past year to $1.7 trillion, Forbes magazine said on Wednesday, and a familiar cast populated the top of the annual list, including Bill Gates, Warren Buffett, Larry Ellison and the Koch brothers.

The average net worth of the 400 wealthiest Americans rose to a record $4.2 billion, up more than 10
percent from a year ago, while the lowest net worth came in at $1.1 billion versus $1.05 billion last year, the magazine said. Seven in ten of the list’s members made their fortunes from scratch.

It was a bad year, however, for social media moguls, whose net worth fell by a combined $11 billion. On the heels of Facebook Inc’s rocky IPO in May, the No 1 social network’s chief executive, Mark Zuckerberg, was the year’s biggest dollar loser: his net worth fell by nearly half to $9.4 billion from $17.5 billion. He also slid to the No 36 slot from No 14 a year ago, Forbes said.

Dismal performances by other social media stocks dropped some executives from the list altogether, including Groupon Inc Chairman Eric Lefkofsky, No 293 on last year’s list, and Zynga Inc Chairman and CEO Mark Pincus, No 212 on the 2011 list.

“The gap between the very rich and merely rich increased and helped drive up the average net worth of The Forbes 400 members to an all-time record $4.2 billion,” said Forbes Senior Wealth Editor Luisa Kroll.

Collectively, this group’s net worth is the equivalent of one-eighth of the entire US economy, which stood at $13.56 trillion in real terms according to the latest government data. But the 13 percent growth in the wealth of the richest Americans far outpaced that of the economy overall, helping widen the chasm between rich and poor.

Forbes attributed the growth in net worth in part to the performance of the stock market and a recovering real estate market.

But while their wealth grew faster than the economy as a whole, which expanded at an anemic 1.7 percent annual rate in the second quarter of 2012, the super rich generally failed to keep pace with the stock market. The benchmark Standard & Poor’s 500 index rose nearly 20 percent over the 12 months ended Aug 24, the last date of market performance measured for this year’s list.