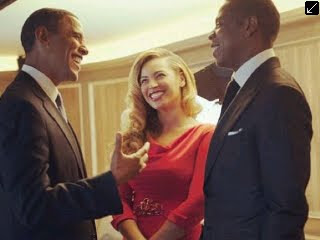 Beyoncé Knowles and Jay-Z chatted with President Obama at a fundraiser in NYC last night. Beyoncé and Jay hosted the event at Jay's 40/40 Club in support of Obama's reelection campaign. Beyoncé chose a red dress for the occasion and said to the crowd, “I can't tell you how proud we are to host tonight's event with President Obama. We believe in his vision.”

The big-money event, the president's second of the day, raised approximately $4 million and featured lavish touches like a tower of 350 champagne bottles. The first lady Michelle Obama was not in attendance.