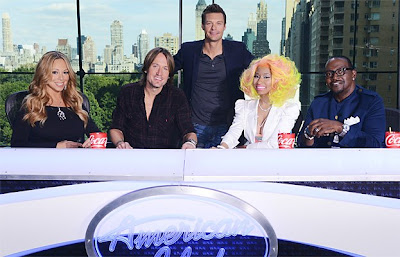 Now that the “American Idol” auditions are officially underway.  Check out the rumored cattiness that’s rumored to be going down between judges Nicki Minaj and Mariah Carey inside…

Apparently, at yesterday’s first “Idol” auditions of the season in New York, ish got real between the two divas of the show.  Reports say each time Nicki tried to judge a contestant’s capabilities, Mariah interrupted with her own judgment.  And Nicki often had to fight back…loudly.  According to TMZ:

Carey and Nicki Minaj went at it during the first “A.I.” taping Sunday in NYC. When Nicki started critiquing a contestant, Mariah would interrupt — not once, but many times. Each time Mariah interrupted, Nicki fought
back by loudly talking over Mariah.

One “A.I.” spy said Mariah and Nicki tried to cover their disdain for each other but everyone saw through it, adding, “These girls just don’t like each other.”

Either they do have a slight issue with each other and it’s being blown out of proportion for ratings….or it’s totally concocted beef for ratings (much like “X-Factor”).  Either way, not surprised.