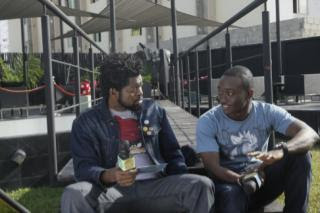 Nigeria’s leading entertainment TV show, The Big Friday Show continues to set the pace and this week, three major celebrities will feature on the 13th edition of the TV show.

Ghana’s favourite and BET award winner, Sarkodie will join the league of prestigious celebrities who have been pranked on The Big Friday Show.

Brymo is the studio guest on this week’s episode, which airs on MTV Base at 7:30pm (8:30pm CAT). The Chocolate City hit-maker lets fans in on some of his success secrets. He also speaks on challenges on his path to stardom.

BFS Vlogger, Stephanie will be our host on theBig Friday Show Vlog segment where she brings fans up to speed on the happenings in the entertainment scene in and out of Nigeria. Based on popular demand, this week’s show will also feature Celeb Surprise where a popular celebrity will visit a huge fan of theirs. Lucky
Glo subscriber of the week, Tunde Daniel presents his wife, Lola Daniel with a pleasant surprise as Nollywood veteran and ladies man, Ramsey Noah pays her a surprise visit with the help of the BIG FRIDAY SHOW crew. Ramsey Noah will present 2 Galaxy Tabs to Tunde and Lola at the end of the visit.

Fast rising music group, Grip Boys will also be featured on this week’s episode. They will be given a challenge so as to promote their music at the end of the show.

Rib cracking segment, Dr Love a.k.a the official pimp daddy of hearts is also on the show as we see Dr Love give hilarious but sincere advise on love and relationship issues. To catch all the fun details, news updates and past episodes, like The Big Friday Show FaceBook on the official Big Friday Show Page: