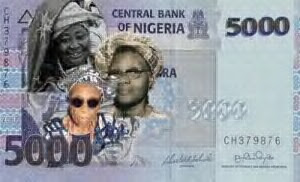 While Nigerians are busy going back and forth over whether the N5000 note should be introduced or not, fresh information has it that there are speculation that the controversial note might already have been printed abroad and shipped into the country, preparatory to distribution as early as January next year.

This is despite the fact that both the House of Representatives and the Senate are insisting that they are yet to give approval for the new note. But the presidency has given its blessings to the introduction of the new note.

However, the Central Bank have come out to declare that what had been printed was just the design and not the original naira note which will come into effect in March 2013.

Therefore, who saw the design said it was the yet to be introduced notes, which they claimed had been
printed and imported waiting for authorization of its release and distribution. Also, some CBN officials who spoke on condition of anonymity said the notes had not been printed. One of them said: “Whatever anybody saw is the design of the proposed currency not the real currency.

“Before introducing any currency, you have to print a design copy for the monetary authorities to vet and look at the features to ensure they meet security specifications and every other feature in it,” he pointed out.