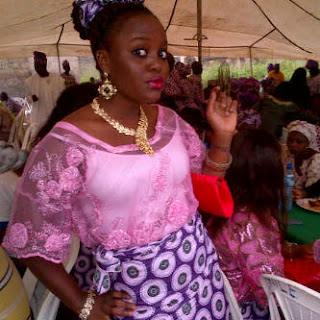 Omowunmi Adebayo, a student of Tai Solarin University (TASUED) 200 level was shot dead  by armed robbers yesterday at Golden Estate in Ijebu Ode. According to sources, it was reported that she refused to allow them sleep with her and she was shot in her face.

Its really sad.. May her soul rest in peace.

Thisday Reported that the robbers had first struck at a bureau de change in Gbagada area, looting it and shooting some people. After robbing the bureau de change, the robbers also raided restaurant owners, recharge card sellers, pedestrians and motorists. Using two vehicles, an SUV and a Toyota Camry salon car, they shot sporadically into the air to scare away the residents. Then they moved on to Ojodu and Ikeja.

As the robbers attempted their get-away, they engaged a police Rapid Response Squad at Guinness Bus Stop, Oba Akran Road, Ikeja in a gun duel. Two police officers lost their lives during the exchange of fire.
The report quoted eyewitness as saying the robbers outgunned the police officers because they took them unawares.

According to an eyewitness simply identified as Akin, the RRS patrol vehicle was not aware that the SUV that was driving by had armed robbers in it and so were not prepared for the onslaught of gunfire that greeted their approach.
However, another report said the robbers opened fire on the RRS team when the policemen were pursuing them. According to eyewitnesses, the police team were pursuing the robbers when both sides engaged in a gun duel at Guinness Bus Stop.

Also, another gang of robbers reportedly shot a Lagos State Traffic Management Authority (LASTMA) official identified as Sosan on both legs around the Anthony Bus Stop at Ikorodu road. The shooting was confirmed by the Public Relations Officer of LASTMA, Bola Ajao. Ajao said that the official was responding to treatment at an undisclosed hospital.

She said: “The robbers at Anthony were said to have operated on a commercial motorcycle and shot some of the LASTMA officials on duty even though they were not armed.
“The bullets pierced through Sosan’s right leg and entered into the left. He lost a lot of blood but he was rushed to the hospital on time and he’s responding to treatment.”

Meanwhile, the Lagos State Commissioner of Police, Umar Manko, confirmed the attacks and the death of the three police officers. He added that the situation was under control. Manko urged Lagosians to go about their activities without fear as the police would ensure their safety.

Register Now for Audition / Admission into ...