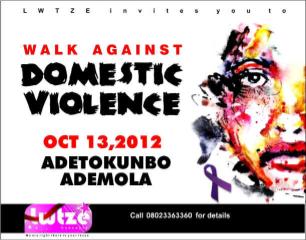 LWTZE Concept led by revered TV personality Olayinka ‘Yeancah’ Adamu would be taking her ‘War against domestic violence’ project to the streets of the Lagos, Nigeria.

Come on the 13th of October, supporters and advocates against Domestic violence would flock the streets of Lagos Island metropolis. The walk would kick off from Adetokunbo Ademola where celebrities, activists, advocates and concerned Nigerians would step out to bring to the consciousness of Nigerians, West Africans and the world the evil in the existent violence at home either
inflicted on children, women and men.

Olayinka ‘Yeancah’ Adamu is one of the pioneering VJ and ambassador for the pan-Africa music channel – Soundcity TV and director of LWTZE (Lady with the Zoom Effect) Concept, a Registered Limited Liability Company that is into Events Management and Brand Promotions. The Company believes in giving back to the society by empowering and  motivating young Women and giving them a chance to rub minds with the
older women so they can hear their stories, learn from their mistakes  and in turn, learn how to become better citizens of the country and the  World over.

Mrs. Olayinka Adamu (nee Dosunmu) popularly known as Yeancah has lived most of her adult life on Television literally. She is a renowned TV Personality. Born Olayinka Dosunmu in the mid 80s, She started
out making a mark in the modeling  Industry as face of a handful of Products from Nestle, Chelsea dry gin
to the now defunct Mtel Nigeria.

Yeancah is an Industrial Relations graduate from the University of Lagos and she is most renowned for her job as Soundcity’s leading Female TV Presenter  where she hosts and produces an array of TV Programmes like City Divas,  Chat Room, Red Carpet Special and the authoritative countdown show – Top 10 Nigeria.
She has carved a niche for herself with her hip, urban and vibrant persona on TV. She has interviewed several A list Celebrities and several prominent people in and outside the Entertainment Industry including Akon, Lloyd – President of Coca Cola, Sisqo and a host of others.

She has been on tour around Africa with artistes, Most notable was with P Square as well as working on the red carpet for big brands like Cocacola, Gordon Sparks, Smirnoff Ice, MTN to mention a few. Before her present job as producer and presenter with Soundcity/Spice TV, She was an actress taking part in a weekly TV Series that aired on Silverbird Television.

Yeancah is a role model to many, a wife and mother of a  daughter.

Details of the ‘War against Domestic Violence – the walk’ and future project would be shared on Twitter via @lwtze and blog via: http://lwtze.blogspot.com.