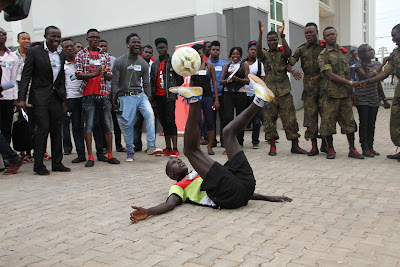 It was the turn of the Niger Delta as the Nigeria’s Got Talent train stormed the cities of Port Harcourt, Warri, and Benin on the 9th, 11th and 13th of August respectively, with the auditions for Season 1 of the talent hunt reality TV show.
Nigeria’s Got Talent, sponsored by telecommunications giant Airtel, continued to defy expectations as throngs of Nigerians, young and old, showed up at the audition venues to try out for a chance to win the N10 million star prize.
Beverly Hills Hotel, Port Harcourt; the BB Hotel, Warri; Excalibur Hotel in Benin City were the audition venues at which the judges and audience watched the Got Talent hopefuls exhibit their talent.
The sheer breadth of talents that graced the auditions in all three cities, and indeed in the cities visited earlier (Abuja, Enugu, and Calabar) have proven that bringing the Got Talent franchise to Nigeria
(only the second African country to get it,) made great sense.
There were Guinness World record chasers, physically challenged persons, dancers, acrobats, singers, ball jugglers, magicians, and many other incredible talents in each of the cities where the auditions held.
The age range swung as wide as from 11 years to 65 years. All these makes Nigeria’s Got Talent the most diverse and audacious reality TV show in the country.

The show will air on terrestrial and cable TV between July and December this year.

Next stop for the Nigeria’s Got Talent auditions are the South-Western States of Ibadan (August 16) and Lagos (August 18 and 19).Interested participants can simply log on towww.gottalentnigeria.com; www.airtellive.com or physically register at the auditioning centres.

The Got Talent franchise worldwide, which is in its sixth year, has produced many notable performers in the last couple of years including Diversity, Bianca Ryan and Britain’s Got Talent’s 2009 1st runner up Susan Boyle, whose debut album became the fastest selling UK debut album of all time, selling over 3 million copies in the U.S.

Eclectic by Sasha Launch This Sunday!

Eva Alordiah on the Black Carpet at ...